I’ve come across a few kids, mostly boys, who will read nothing but non-fiction. They have a passion for finding out how things work and are constantly ‘fiddling’ around with whatever object is close by. 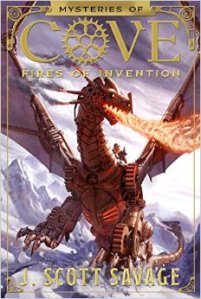 Maybe this first book in the new MYSTERIES OF COVE trilogy will provide a fiction outlet for their way of thinking. That’s a mechanical dragon on the cover created by two of the main characters in this tale, Trenton and Kallista,

There’s not only a dragon, but Cove is a city built within a mountain when technology destroys the outside world. Life inside forbids creativity or invention since that is what chased them into this new environment to begin with. It’s the future, but the inhabitants of Cove survive by incorporating technology born out of the 1800’s. It’s safer that way.

Enter our young teen heroes and they will stop at nothing to uncover the secrets of Cove set into motion over 100 years in the past. And that means secretly building that dragon. The adventure is fast paced and you will be visualizing this new society as the levels inside the mountain come alive.

Enjoy the ride on this one now so you’ll be ready for the book two where the world outside the Cove will be explored.

FULL PLOT (From Amazon): Trenton Colman is a creative thirteen-year-old boy with a knack for all things mechanical. But his talents are viewed with suspicion in Cove, a steam-powered city built inside a mountain. In Cove, creativity is a crime and invention is a curse word.

Kallista Babbage is a repair technician and daughter of the notorious Leo Babbage, whose father died in an explosion an event the leaders of Cove point to as an example of the danger of creativity.

Working together, Trenton and Kallista learn that Leo Babbage was developing a secret project before he perished. Following clues he left behind, they begin to assemble a strange machine that is unlikely anything they’ve ever seen before. They soon discover that what they are building may threaten every truth their city is founded on and quite possibly their very lives.

FIVE THINGS TO LIKE ABOUT: FIRES OF INVENTION by J. Scott Savage

He clenched his hands in his hair. His mother. This would kill her. How many times had she warned him that tinkering would get him into trouble? How many times had she made him sit at the table, writing line after line: We are all gears and cogs in a magnificent machine. When we do our part as it has been prescribed, the machine runs smoothly. When we do things differently, society suffers.

“One of my favorite experiences is having a boy or girl tell me that my books are the reason they learned a love for reading. .” From J. Scott Savage’s web site.

17 Responses to MYSTERIES OF COVE: FIRES OF INVENTION for Marvelous Middle Grade Monday