THE NOCTURNALS: THE OMINOUS EYE for Marvelous Middle Grade Monday

New this week is the second adventure with three unlikely friends – Dawn, a serious fox, 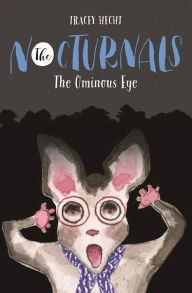 Tobin, a sweet pangolin, and Bismark, a loud-mouthed sugar glider. Together they make up the Nocturnal Brigade. Check out the nice background description of each on THE NOCTURNALS web site.

If you have never heard of a tuatara, join the club. With a little help from the publisher and the story, I discovered a tuatara is an endangered lizard from New Zealand with spiky scales. It’s known as a “living fossil” and has a third eye on top of its head. Scientists think they use it to judge the time of day, though Polyphema claims that this extra eye allows her to have the “power of sight”.

There’s plenty of humorous dialog in between the tense scenes and if you decide to jump in without reading the first adventure, THE OMINOUS EYE stands on its own. You won’t know who to trust until the exciting climatic rumble. Enriched with 27 four color illustrations, this tale with its manageable chapter lengths will make a great read aloud either in the classroom or curled up at home before lights out.

In the words of Bismark, “Holy smokes!”

FULL PLOT (From FABLED FILMS ) When a violent jolt fractures the earth, the Nocturnal Brigade sets out to investigate its source. Along their journey, Dawn, Bismark, and Tobin meet an unfamiliar reptile—a tuatara—who reveals that a giant beast caused the destruction and will soon strike again. The tuatara, with her special insights, is the only one who can help them stop this fearsome predator… but can she be trusted? With help from an owl, the jerboas and a few kiwis, a trap is set since surrender is not an option against this relentless beast.

FIVE THINGS TO LIKE ABOUT: THE NOCTURNALS: THE OMINOUS EYE by Tracey Hecht

FAVORITE LINES: “So be it! Bold in adventure, brave in challenge, the Nocturnal Brigade to the rescue!” cried Bismark. With a flourish, he drew out his glittering, blue snakeskin cape – the costume the Brigade wore when they were on a mission. Dawn and Tobin took their capes out, too, and fastened them around their necks. Within a moment, the trio was ready. It was time to keep the Brigade’s promise to protect the animals of the night.

AUTHOR QUOTE (from a BN KIDS BLOG Interview): I have one middle grade aged child who is a huge influence on the material.  He is the reason there is a hockey game in the first book of the series, The Mysterious Abductions. My older kids read the material and help me with ideas as well. My middle daughter plays the voice of Dawn in all of the animated shorts we are making for the series. I would say that all of the kids in my life, my nieces, friends, neighbors etc., influence how I tell these stories and what I choose to tell them about. You learn a lot about conversational dynamics and issues of middle graders when you spend time with them.

See more at THE NOCTURNALS website including some great resources for teachers.

Make a comment if you have time. I enjoy reading all of them. Just click on the Comments word below.

13 Responses to THE NOCTURNALS: THE OMINOUS EYE for Marvelous Middle Grade Monday