The third installment of the Story Thieves series had me puzzled at its conclusion. If this 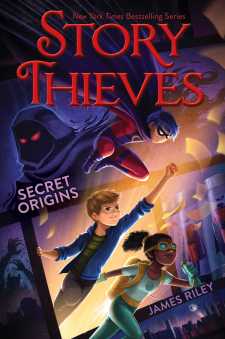 was a trilogy, why weren’t all the plot points neatly wrapped up on the final pages? I must have missed the memo because this is destined to be a five book series. Thank goodness.

If you are new to Story Thieves, don’t begin here. You’ll be totally confused—well, enough that you won’t enjoy it as much. Start from the beginning with STORY THIEVES, a grand adventure. Next move into STORY THIEVES—THE STOLEN CHAPTERS, a wildly imaginative mystery. Only then should you delve into STOLEN CHAPTER—SECRET ORIGINS, set in the comic book world.

Yes, the mystery and adventure threads continue here with Owen and Bethany in search of her father. You’ll find the same level of humor and snappy dialog. There are even a few comic book panels thrown in. Great for avid readers or as a read-aloud, its just hard to resist the creativity that went into the building of this tale.

FULL PLOT (From Amazon):  Owen and Bethany have sworn off jumping into books for good. But they didn’t make any promises about not jumping through strange portals that lead to a comic book world.

Jupiter City was once filled with brightly costumed superheroes and villains, but nowadays, there’s nothing left but the Dark. Even the villains are terrified of the Dark’s shadows, and most of the heroes have either disappeared or been lost to mind control. The one hero who might have stopped all of this, Doc Twilight, has been imprisoned by the Dark.

But who is Doc Twilight really? And how can Bethany and Owen defeat the Dark without superpowers of their own? They’ll definitely need the help of some old friends and new allies to bring the light back to Jupiter City, and find out the truth behind the Dark.

It all comes back to Bethany’s own secret origins. What really happened when her fictional father disappeared years ago? Who is Nobody, and why is he writing these Story Thieves books? And what kind of supervillain name is The Rotten Banana?

FAVORITE LINES: “Pretty much,” Owen told her, shrugging. “It’s how superheroes get their powers, and if we want to beat the Dark, we’re going to have to play by the same rules he does.”

Bethany just shook her head, her mouth hanging open. “This might be your worst idea since you saved the Magister.”

Owen nodded. “Probably. But I’m right about this, and you know it.”

QUOTE FROM AUTHOR: The fourth book will be in the Choose Your Own Adventure style, with readers getting to choose what Owen should do next, while he fights against those choices. As far as the fifth book, I don’t plan for that one to be in a particular different genre. Number five will mostly just wrap up the series. From a Reading Rainbow Interview