Posted on November 6, 2017 by Greg Pattridge

Take a journey back in time with Bobby Lee as he flees his orphanage in 1923 New Orleans and boards a train to Chicago. His goal—a new life as a criminal. A full blown murder mystery 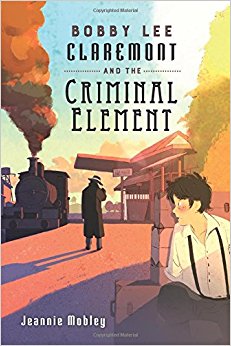 unfolds on the rails with a widow and a lot of people up to no good. Bobby Lee meets up with two other boys who ride in the “colored only” car and together they try to figure out what’s going on.

A train is the perfect setting for unleashing tension at every stop. They tug at Bobby Lee’s heart and make him wonder if he’s doing the right thing. By the end of the trip your own heart will ache at the decisions Bobby makes along the way but also hopeful that the positive adults in his life will steer him to the good side.

Heartwarming and funny at times, Jeannie Mobley has nailed this time period with perfection. I enjoyed the trip immensely.

All aboard for a fast-paced, Jazz Age–era murder mystery set aboard a Chicago-bound train! It’s 1923, and thirteen-year-old Bobby Lee Claremont is leaving the Sisters of Charitable Mercy orphanage in New Orleans, certain a better life awaits in Chicago’s glamorous-sounding mob scene. But his plans unravel when he boards his train and meets the recently widowed Nanette O’Halloran, her two traveling companions, and a cop who suspects the trio of murdering Nanette’s husband. Bobby Lee is sure Nanette’s innocent. But what about her companions? As Bobby Lee digs for answers, he discovers the
mob, Prohibition, segregation, and a famed jazz band are all pieces of an increasingly dangerous puzzle.

Mrs. O’Halloran nodded. “Thank you, Bobby Lee. You are a good boy.”

A good boy. She wouldn’t think so if she knew about my plans to become a first-rate crook in Chicago. Good folks didn’t get ahead in the world. Being good to me was what killed Maman. I was done with good. So why did it warm my empty belly to hear her say it?

When I am not being a writer, I am an archaeologist and a college professor.

I have worked on archaeological sites from North Dakota to El Salvador, but I specialize in the archaeology of the American Southwest and the prehistoric cultures around Mesa Verde in southwest Colorado.

I have lived most of my life in Colorado, but have ventured out of its boundaries on numerous occasions, some adventurous and others mundane. I love the mountains, the forests, the quiet of the country side. I love, too, to think about the extraordinary nature of ordinary lives.

Whether it is the ruins of Mesa Verde or the remains of gold miner’s cabins, Colorado is full of reminders of those who came before. Though the people of the past are now silent, their stories come to me in the things they left behind. This is what drew me to both my callings, as an archaeologist, exploring the past through science, and as a writer, giving voice to the fullness of life’s experiences.

(For more about Jeannie and her books visit her author web page and catch my interview last week with Jeannie right here.)

6 Responses to BOBBY LEE CLAREMONT AND THE CRIMINAL ELEMENT