Most middle graders have little background on the politics and leaders of our country—especially from the past. What they do know is heard through parents/teachers, the 24/7 endless new cycle, and social media. There’s not a better way to open their eyes than this new series from Time. The stories take you back to how the United States was formed and the people responsible. It’s not just a retelling of the events and lives, but an in depth and often eye opening exploration of these inspiring figures.

This Fall brings the next two titles featuring Eleanor Roosevelt and Thurgood Marshall. First up though are Alexander Hamilton and George Washington due out this week. 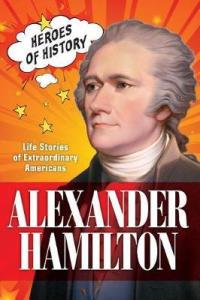 Here are a few of the highlights:

ALEXANDER HAMILTON He’s on the ten-dollar bill and in the past few years has received renewed interest due to a little musical bearing his name. Hamilton was the nation’s first secretary of treasury. His life ended tragically in a duel with Aaron Burr, essentially ending both of their careers with the negative publicity it caused for Burr.

But the story goes deeper as to what happened in between his birth (1755) and his death by that bullet in 1804. He spent the first seventeen years in the Caribbean islands of Nevis and St. Croix. Tragedy sent him to America in 1772. He assisted George Washington and led troops into war with the British. Writing and politics were his calling card and he had a big role in the formation of the two party system.

Told in seven colorful chapters, the pages also include dozens of reproductions of artworks, photographs, artifacts and illustrations. There is also a timeline appearing at the bottom of numerous pages and in the back of the book. The side stories are fascinating, including his involvement in what may have been the first political inappropriate scandal in America.

Perfect for middle graders who love history and anyone else who need the reminder of what is was like when our country had its start.

GEORGE WASHINGTON: Everyone knows the name and now you can get to know the person through this second book in the Heroes of History series. The story of his short life (67 years) will surprise many readers from his leadership in many wars to his rise as the first president. The pages are loaded with fascinating tidbits about his family and work life…

*George and Martha never had any children, although she had two from a first marriage.

*I can not tell a lie! It’s a huge myth that he ever chopped down a cherry tree.

*Washington was probably not standing in the boat during the famous crossing of the Delaware River like the famous painting portrays. He would have gone overboard.

You’ll also learn of the struggles he had with keeping this country together in the early stages with political squabbles both at home and abroad. His beloved residence known as Mt. Vernon is also featured.  The back pages are filled with his own writings along with background on reasons for the words he wrote. Finally, you will fully understand General Henry Lee’s words at Washington’s funeral service—

“first in war, first in peace, first in the hearts of his countrymen.”

Make a comment if you have time by clicking on the comments link below. I enjoy reading all of them.

8 Responses to HEROES OF HISTORY