Posted on December 2, 2018 by Greg Pattridge

The Turnaway Girls is set in Blightsend where singing is not allowed. The Masters — men and boys — make music with instruments. Women and girls trapped underground turn the music into gold. Twelve-year-old Delphernia Undersea hates her life, especially Mother Nine, the abusive caretaker.  Despi

te the dangers, Delphernia sings in secret. Then one day a Master claims her and takes the young girl above ground where mysteries abound.

This elegantly told fantasy is like a poem stretched to bring meaning to your true self through music. Delphernia take center stage as the first-person narrator and like her, readers will at times be thoroughly confused by what is happening. Thankfully, all is explained by the climatic end. The final sixty pages gave the plot a needed push and saved the story.

Like myself, I’m sure many teachers and librarians will gush over the lyrical qualities of the book. The problem is the targeted MG age group may have a hard time wrapping themselves up in this fantastical tale. Regardless, I look forward to what comes next for this debut author.

THE OFFICIAL BLURB (From AMAZON)

Delphernia Undersea wants to sing. But everyone on Blightsend knows music belongs to the Masters — and girls with singing throats are swallowed by the sea.On the strange, stormy island of Blightsend, twelve-year-old Delphernia Undersea has spent her whole life in the cloister of turnaway girls, hidden from sea and sky by a dome of stone and the laws of the island. Outside, the Masters play their music. Inside, the turnaway girls silently make that music into gold. Making shimmer, Mother Nine calls it. But Delphernia can’t make shimmer. She would rather sing than stay silent. When a Master who doesn’t act like a Master comes to the skydoor, it’s a chance for Delphernia to leave the cloister. Outside the stone dome, the sea breathes like a wild beast, the sky watches with stars like eyes, and even the gardens have claws. Outside, secrets fall silent in halls without sound. And outside, Delphernia is caught — between the island’s sinister Custodian and its mysterious Childer-Queen. Between a poem-speaking prince and a girl who feels like freedom. And in a debut that glimmers with hope and beauty, freedom — to sing, to change, to live — is precisely what’s at stake.

The wind catches the door again and flings it shut over the boy’s head. He jumps, but he keeps climbing down. And then we are held, the three of us, in the cloister’s quiet: me, and Mother Nine, and a boy who could have killed me.

A QUOTE FROM THE AUTHOR, HAYLEY CHEWINS

I’ve never done this before. I’ve always thought of myself as a one-project-at-a-time sort of writer. But if there’s anything I’ve learnt about writing (and life) it’s this: never assume anything you know about yourself is unchangeable. You can change anything if you really want to.

(For more about how Hayley writes three books at the same time, visit her blog).

I received a copy of the book for my honest review.  Make a comment if you have time. I enjoy reading all of them.

If you missed Friday’s post, I’m giving a away a four book series on The Renaissance. Click here to read all about it with details on how to enter. 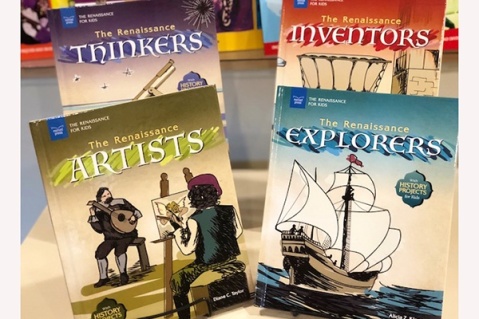 5 Responses to THE TURNAWAY GIRLS