THE JACKET for 48 Hour Book Challenge

THE JACKET by Andrew Clements 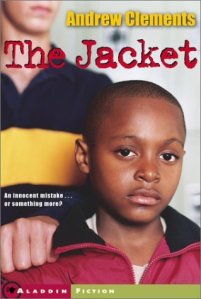 BOOK JACKET DESCRIPTION: Phil is on a mission. His absentminded little brother forgot his lunch money. All kinds of thoughts are running through Phil’s mind as he searches for Jimmy in the throngs of fourth and fifth graders crowding the school hallway… Then Phil spots Jimmy’s one-of-a-kind jacket and rushes to the corner of the hallway. Except the person wearing it isn’t his brother; it’s some black kid Phils never seen before –wearing Jimmy’s jacket! Phil makes an accusation, tempers flare, and both kids wind up in the principal’s office.

How will Phil react when he finds out how Daniel came to be the owner of the unique jacket? Will Daniel be able to forgive Phil for an accusation that was based on racial prejudice? What will each boy learn about the other, and more important, about himself?

FAVORITE LINES OF DIVERSITY: And he thought, This morning, what if Daniel had been a white kid? Would I have grabbed him like that? If he looked like he belonged in that jacket, would I said he stole it?

MY THOUGHTS: This is a quick read that packs a punch. The actions and reactions of these two boys is very believable. Despite being written twelve years ago, the lessons learned are still appropriate today. Highly recommended!

NEXT UP: THE LAST BEST DAYS OF SUMMER by Valerie Hobbs

MY MOTIVATION LEVEL: I think I may have dozed off writing this sentence. I’m losing steam but a little caffeine break and completing book #5 tonight looks possible. I’ll be up early trying to squeeze in a short title before it’s back to football camp. I’ll be taking with me two of my longer titles.

4 Responses to THE JACKET for 48 Hour Book Challenge