I recently had the privilege of interviewing author Annie McMahon on her blog tour for the release of ADVENTURE ON NEMESIS MOUNTAIN. A few days later my luck continued as I was chosen from all blog tour hosts to receive an autographed copy.

The story is one that will hit home with many young readers. For what seems like his 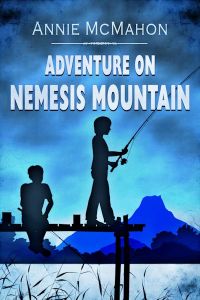 entire life, Emilio has been prey to to the teasing and put downs from his own nemesis, Hans. Now the two boys are thrown together in a survival situation after getting lost in the mountains. It’s a story about fighting back, friendship, and seeing the positive in others. The tale is full of positive messages that will stay with you long after reading. Spend some time reading it yourself, or use it as a read-aloud. You’ll also learn a thing or two about the outdoors. A great story makes for a great debut and this one has both.

FULL PLOT (From Amazon):  Emilio would rather eat a slimy worm than miss the fifth grade field trip. Nemesis Mountain must be full of rare leaf specimens and bugs for his collection. Besides, he needs a break from the playground and Hans’s nonstop teasing. His excitement is squashed when he gets lost in the woods with his worst enemy. Alone in the forest, the two boys battle to survive the harsh wilderness, facing challenges that will change their lives forever.

He slammed his hands on the desk, toppling the pencil holder with a clang. “I’m sick and tired of you!”