I won a copy of this book from fellow writer and blogger, Rosi, over at her fantastic blogging home, THE WRITE STUFF. Check it out and some day you may win, too!

I found WATCH THE SKY to be a beautifully written though a difficult to read story. I would only use this as a read-aloud or in a reading group. 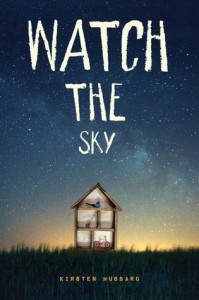 The story is rich with discussion topics:

1.  What is wrong with the stepfather, Caleb? (We suspect PTSD from his soldier days or another form of mental illness.) I detested him immediately and hated what he was doing to this family.

2. Why does the Mom blindly follow this man not seeing how he is endangering the children?

3. Where did little adopted sister, Kit, come from? It’s only explained she showed up in a pumpkin patch one day.

4. Is it possible for one person to convince others his decisions are going to save their lives, even though what he says is far from plausible? How does a person become so controlling?

Not every one of these points are covered by the last page so they are ripe for debate. The most pressing question though is what happens to this family in the future? Too many unanswered pieces as I closed the book for the last time.

FULL PLOT (From Amazon):  The signs are everywhere, Jory’s stepfather, Caleb, says. Red leaves in the springtime. Pages torn from a library book. All the fish in an aquarium facing the same way. A cracked egg with twin yolks. Everywhere and anywhere. And because of them, Jory’s life is far from ordinary. He must follow a very specific set of rules: don’t trust anyone outside the family, have your work boots at the ready just in case, and always, always watch out for the signs. The end is coming, and they must be prepared.

School is Jory’s only escape from Caleb’s tight grasp. With the help of new friends, he begins to explore a world beyond his family’s farm. Then Caleb notifies the family that the time has come for final preparations: digging in their backyard canyon at night. Every night.

As the hole gets deeper, so does Jory’s doubt about whether Caleb’s prophecy is true. When the real reason for their digging becomes clear, Jory must choose between living his own life or following behind Caleb, shutting his eyes to the bright world he’s just begun to see.

FIVE THINGS TO LIKE ABOUT WATCH THE SKY by Kristen Hubbbard

FAVORITE LINES: Most kids had friends they hung out with after school. Most kids had mothers who left the house more than every couple of weeks. Most kids had siblings who spoke. And Jory never asked, but he was sure nobody had step-dads who constantly talked about signs.

8 Responses to WATCH THE SKY for Marvelous Middle Grade Monday