Five More for the Future

Earlier this year I added five anticipated MG novels to my sky high future read list. In just four months I’ve reduced that list to One for the Future as I zipped through the first four close to their release date. Here then are another five I can’t wait to crack open – hopefully by the end of 2016:

The Best Man (Richard Peck) Sept. 20, 2016 I’ve enjoyed many Peck novels over the past few decades and glad to see at 82 he is still cranking them out. This one probably wouldn’t have been published back in 1972 when Richard Peck’s first book was released.

Book Jacket Synopsis: When Archer is in sixth grade, his beloved uncle Paul marries another man—Archer’s favorite student teacher. But that’s getting ahead of the story, and a wonderful story it is. In Archer’s sweetly naïve but observant voice, his life through elementary school is recounted: the outspoken, ever-loyal friends he makes, the teachers who blunder or inspire, and the family members who serve as his role models. From one exhilarating, unexpected episode to another, Archer’s story rolls along as he puzzles over the people in his life and the kind of person he wants to become…and manages to help his uncle become his best self as well.

who shared this unusual trait. I think I learned more from him than the other way around. This one puts a fantasy bent to the ability that is sure to please.

Every resident of the planet Yipsmix has synesthesia—they don’t just hear sounds; they see and taste them, too. On this unusual planet, poor Jaq Rollop must save his family’s farm. To do so, Jaq is forced to sell his beloved pet and only friend. Trusting and naïve, Jaq gets swindled into trading his pet for a seemingly worthless key. But then something very strange happens. The key leads Jaq through a wormhole to a terrifying and magical land full of riches, overwhelming sensations, and giants. The name of this frightening land? Earth. This clever middle-grade fantasy will appeal to fans of the Sisters Grimm, A Tale Dark & Grimm, and the Land of Stories series.

The Seventh Wish (Kate Messner) June 7, 2016 Her books are always popular with kids. The Ranger in Time series is one of her best, but this new story has one of the more unique plots.

Charlie feels like she’s always coming in last. From her Mom’s new job to her sister’s life away at college, everything else always seems to be more important than Charlie’s upcoming dance competition or science project. Unsure of how to get her family’s attention, Charlie comes across the surprise of her life one day while ice-fishing . . . in the form of a floppy, scaly fish offering to grant her a wish in exchange for its freedom. Charlie can’t believe her luck until she realizes that this fish has a funny way of granting wishes, despite her best intentions. But when her family faces a challenge bigger than any they’ve ever experienced, Charlie wonders if some things might be too important to risk on a wish.

Mighty Jack (Ben Hatke) Sept. 6, 2016  I like contemporary stories that shift into fantasy. I 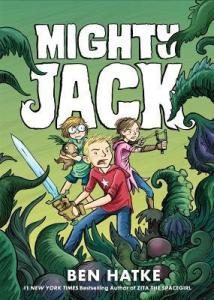 can’t wait to get my hands on this one.

Jack might be the only kid in the world who’s dreading summer. But he’s got a good reason: summer is when his single mom takes a second job and leaves him at home to watch his autistic kid sister, Maddy. It’s a lot of responsibility, and it’s boring, too, because Maddy doesn’t talk. Ever. But then, one day at the flea market, Maddy does talk―to tell Jack to trade their mom’s car for a box of mysterious seeds. It’s the best mistake Jack has ever made.

What starts as a normal little garden out back behind the house quickly grows up into a wild, magical jungle with tiny onion babies running amok, huge, pink pumpkins that bite, and, on one moonlit night that changes everything…a dragon. 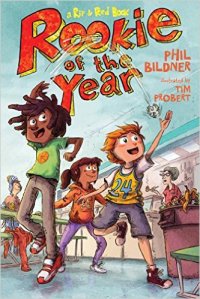 Rookie of the Year (Rip and Red) (Phil Bildner) July 12, 2016 I enjoyed the first story in this series, A WHOLE NEW BALLGAME, and these unique friends are back with another tale.

Just when they think they’ve got the hang of things, Rip and Red find that fifth grade continues to challenge them in head-spinning ways. Tiki, a new girl whose Egyptian dad is an animal-rights activist, has just joined their class. She’s charismatic, funny―and she’s got game! Rip has his world turned upside down as Tiki proves to be tough competition on the Clifton United basketball team and leads a rebellion against the lousy new food service in the school cafeteria. Red―a kid on the autism spectrum―is struggling with the upheavals as well. But as these two funky and funny best friends discover, sometimes radical change is the right move, on the court and off.

That’s it for now. My TBR stack just tipped over!

Climbing another mountain...always striving to reach the next peak in my life and career.
View all posts by Greg Pattridge →
This entry was posted in Book Lists, New Release and tagged Ben Hatke, Kate Messner, Mighty Jack, Phil Bildner, Richard Peck, Rookie of the Year, Sheila Grau, The Best Man, The Boy With 17 Senses, The Seventh Wish. Bookmark the permalink.

7 Responses to Five More for the Future