THE NINJA LIBRARIANS: SWORD IN THE STACKS for Marvelous Middle Grade Monday

Last year I reviewed THE NINJA LIBRARIANS: THE ACCIDENTAL KEYHAND and enjoyed the characters and intriguing plot. Dorrie and her older brother are back in the second book in this fun series that uses a 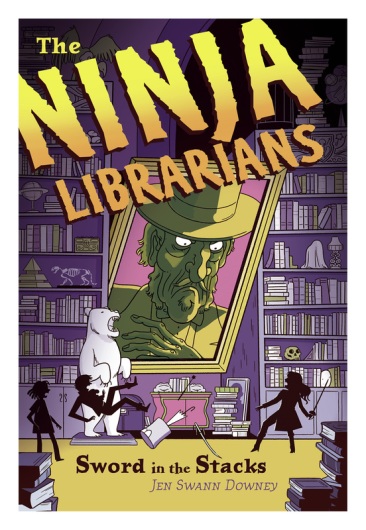 library as the setting. My library is nothing like what unfolds at Petrarch’s.

You could certainly start with this new entry in the series, but you’d miss out on many connections to the first book. Nevertheless, author Jen Swann Downey does supply the needed background information  in the opening chapters. There’s also another sticky problem to take care of – Dorrie and Marcus’s parents have to be convinced to let their children go live at this strange place of training where no contact with them is allowed. It doesn’t seem to bother the kids as the parents aren’t mentioned again until the end. The strange classes and mystery of the evil Foundation is enough to keep Dorrie and Marcus occupied.

Full of humor, sneaky time travel passage ways, and a creepy villain, you’ll never look at that person behind the check-out desk the same way again.

Now official apprentices of the Lybrariad, Dorris and Marcus join Ebba in the immense time-folding labyrinth known as Petrarch’s Library for the summer quarter.

Dorrie is eager to do well at her practicums, and prove her worth as an apprentice, but before she can choose between  “Spears, Axes, and Cats: Throwing Objects with Precision and Flair” and “First and Last Aid: When No One Else Is Coming”, mistakes made by Dorrie in the past cause trouble for the lybrarians.

The Foundation, once nearly destroyed by the Lybrariad, now has the means to rise from its ashes, and disappear reading and writing from the world.  To succeed, it sets in motion a dark plan to increase the power of a cruel figure from the fifteenth century.

To stop the Foundation, Dorrie, Marcus and Ebba will have to burglarize Aristotle, gather information among the suffragists and anti-suffragists of 1913 London, and risk their lives to wrest a powerful weapon out of the Foundation’s hands – all while upholding the Lybrariad’s first principle of protecting all writing, liked or not. If they fail, reading and writing aren’t the only things that will disappear.

FIVE THINGS TO LIKE ABOUT THE NINJA LIBRARIANS: SWORD IN THE STACKS by Jen Swann Downey

“It takes many lybrarians to conduct the rescue missions,” said Phillip. “The Lybrariad regularly trains librarians with an i into lybrarians with a y. If you permit Dorrie and Marcus to train as apprentices, they’ll learn research and reference skills, along with how to gain entry to a locked room, set a broken bone, ride anything with four legs, practice all seventeen uses for a flaming arrow–”

And when you’ve written a book for kids, you are specifically if subconsciously waiting for A KID to respond. For a kid to be sucked in, and feel for your characters, to laugh and go bug-eyed and gasp in all the right places. It’s that first kid who reads with gusto and love that turns your wooden puppet into a real boy (or girl in the updated version!) And it’s on the day you’ve heard that it’s happened, that your book feels truly born. From Jen’s BLOG

Leave a comment below… I love reading all of them!

9 Responses to THE NINJA LIBRARIANS: SWORD IN THE STACKS for Marvelous Middle Grade Monday