“I do solemnly swear…”

I’m sure many of you were like me this past November, glued to the the screen as we watched this year’s presidential election come down to the wire. Author Ann Bausum and the editors at National Geographic Children’s Books also gave the night their undivided attention but for far different reasons. They had a deadline to meet. 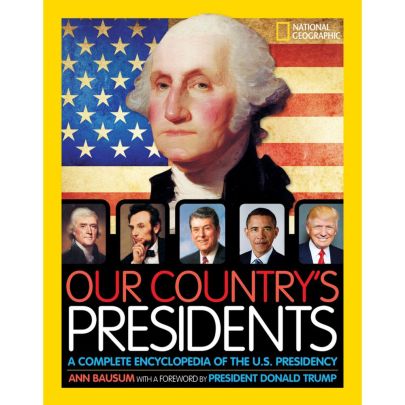 just in time for the inauguration.  In this newest edition there are profiles of the 44 individuals who have served as President, plus extensive coverage of the 2016 presidential campaign as well as America’s newest commander in chief.

I read the book in order through all 224 pages. The next time the category of U.S. Presidents pops up on Jeopardy–watch out. I’ll ace every question. Of course most readers will probably use this source like an encyclopedia, looking for one specific piece of information. Even the most obscure facts can be found…

But don’t be misled that OUR COUNTRY’S PRESIDENTS is just a compilation of facts. There is so much more. The encyclopedia is divided into six eras in our history from THE PRESIDENCY AND HOW IT GREW (1789-1837) all the way to FOOTPRINTS ON THE GLOBAL FRONTIER (1981-present). Each section begins with a timeline of important events in that era.

Next is the official full color portrait or photograph of each president from that era followed by a 2-6 page profile. You will also find a fact box with the president’s official signature along with a wide variety of additional information, including how many states were in the Union at the start of their term.

Nearly two dozen bonus two-page spreads are scattered throughout the book jumping into topics beyond what is covered about the 45 presidents. I enjoyed: You’ve Got Mail: Swapping Letters With the President; Kids in the White House: At Home in the Spotlight; and Presidential Landmarks: from Log Cabins to Libraries.

The book ends with more delights, including a four page chart of the election results (I hadn’t recalled Jimmy Carter’s attempt at a second term earned him only 49 electoral votes!).

There are also ways to learn more with a selection of books, websites, videos, and places to visit. A handy bibliography and index help direct readers to the information they need.

Teachers, parents, and students will find this encyclopedia a hard one to put down. Don’t worry, you have four years. Plenty of time for each of us to discover the inspiration of our unique history in the White House from this fantastic source.

Author Carter Roy stops by this Friday to answer a few questions. He’s about to launch the third book in the BLOOD GUARD series. See you then!

Make a comment below if you have time. I enjoy reading all of them.