I’m catching up with my stack of to be read books, which has me adding more. It’s a never ending stream of great middle grade books coming out this year. Many launch dates have already occurred, but many more are set to arrive over the next nine months.

No way do I have time to read every one. Goodreads list of 2017 Middle Grade Novels totals a mind numbing 378!  I need a more selective list like this one at BRIGHTLY—a more manageable list of 17 books (8 of which are already out).

My own personal list for 2017 has three at the very top: 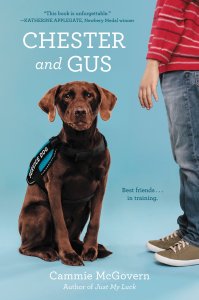 Chester has always wanted to become a service dog. When he fails his certification test, though, it seems like that dream will never come true—until a family adopts him. They want him to be a companion for their ten-year-old son, Gus, who has autism. But Gus acts so differently than anyone Chester has ever met. He never wants to pet Chester, and sometimes he doesn’t even want Chester in the room. Chester’s not sure how to help Gus since this isn’t exactly the job he trained for—but he’s determined to figure it out. Because after all, Gus is now his person.

In the spirit of beloved classics like Because of Winn-Dixie, Shiloh, and Old Yeller, Cammie McGovern’s heartfelt novel—told from Chester’s point of view—explores the extraordinary friendship between a child and a dog with a poignant and modern twist.

2. I hid a baby duck in my closet as a kid and tried to raise him. I even had a wading pool in there, but the constant peeping brought both parents to my side after about four hours. This isn’t a story about a duck, but I’m sure I’ll be smiling the whole way. A BOY CALLED BAT by Elana K. Arnold-March 14, 2017:

For Bixby Alexander Tam (nicknamed Bat), life tends to be full of surprises—some of them good, some not so good. Today, though, is a good-surprise day. Bat’s mom, a veterinarian, has brought home a baby skunk, which she needs to take care of until she can hand him over to a wild-animal shelter.

But the minute Bat meets the kit, he knows they belong together. And he’s got one month to show his mom that a baby skunk might just make a pretty terrific pet.

3. I enjoy friendship stories and here comes a tender sounding tale with a unique title, THE SOMEDAY SUITCASE by Corey Ann Haydu–June 27, 2017:

Clover and Danny are the kind of best friends who make each other even better. They’re so important to each other that Clover believes they’re symbiotic her favorite science word, which describes two beings who can’t function without the other. But when Danny comes down with a mysterious illness that won’t go away, the doctors can’t figure out what’s wrong with him. So Clover decides to take matters into her own hands by making lists–list of Danny’s symptoms, his good days, his bad days.

As the evidence piles up, only one thing becomes clear: Danny is only better when Clover is around.

Suddenly it feels like time is running out for Clover and Danny to do everything they’ve planned together–to finally see snow, to go on a trip with the suitcase they picked out together. Will science be able to save Danny, or is this the one time when magic can overcome the unthinkable?

2 Responses to WHAT TO READ?