THE ONE GOOD THING ABOUT AMERICA for Marvelous Middle Grade Monday

Living in America after fleeing another country is full of challenges. Just ask Anaïs who 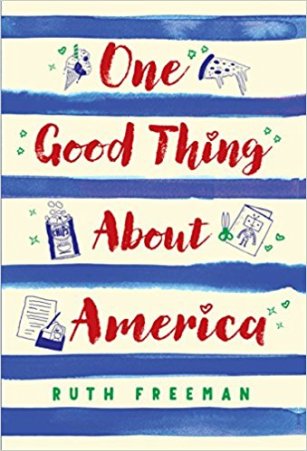 arrives in the U.S. from Africa with her mother and younger brother. She’s full of questions about the language, food, and strange customs we Americans don’t even think twice about.

This eye opening tale is told through letters Anaïs writes to her beloved grandmother. She worries not only about her Oma, but also about Papa and an older brother who stayed behind amidst the chaos in the Congo. Her grandmother asks that Anaïs find one good thing about America to share in each of her letters. When the story begins in September she can’t come up with much, but as the school year progresses, taking us all the way to June, she finds many things to her liking.

We also get a glimpse of other immigrants—an Iraqi boy and a girl from Somali. Don’t expect a full rounded story that answers every plot point. It just isn’t possible in the 10 months covered as the subject would require many more years for a full understanding.

Honest and heartfelt, the author knows the subject well herself as a teacher of English Language Learners (ELL). This quick read will give readers a little more compassion to the plight of so many. It’s an important story for all of us to see how difficult life is for a family immigrating to another country.

FULL PLOT (From HOLIDAY HOUSE) It’s hard to start at a new school . . . especially if you’re in a new country. Back home, Anaïs was the best English student in her class. Here in Crazy America she feels like she doesn’t know English at all. Nothing makes sense (chicken FINGERS?), and the kids at school have some very strange ideas about Africa. Anais misses her family . . . so she writes lots of letters to Oma, her grandmother. She tells her she misses her and hopes the war is over soon. She tells her about Halloween, snow, mac ‘n’ cheese dinners, and princess sleepovers. She tells her about the weird things Crazy Americans do, and how she just might be turning into a Crazy American herself.

FIVE THINGS TO LIKE ABOUT: THE ONE GOOD THING ABOUT AMERICA by Ruth Freeman

Here is one little letter before I go to bed. It is about one more crazy thing they do here in America! Every day in school we pray like in my school at home. But we pray to the flag. Over the loud box comes voices of students and we say with them words about the God that is invisible. This is one word I know now. Invisible. Miss say it mean something we don’t see. Sometimes I think I will like to be invisible very much. They do not say Amen. They say Please Be Seated Thank You And Have a Nice Day. Many people in America say Have A Nice Day all the time. Maybe it is the crazy America way for Amen. I do not know.

ABOUT THE AUTHOR : Ruth Freeman grew up in rural Pennsylvania but now lives in Maine where she teaches students who are English language learners, including many newly arrived immigrants. She is the author of several acclaimed nonfiction picture books. One Good Thing About America is her first novel.