FIVE FOR THE SUMMER

The summer months are when my reading ramps up. Whether at home or enjoying a weekend escape to an out of town destination, I have a book nearby. Here’s the top five on my upcoming summer reading list.

I LOVE YOU MICHAEL COLLINS (June 20, 2017) It’s 1969 and the country is gearing up for what looks to be the most exciting moment in U.S. history: men landing on the moon. Ten-year-old Mamie’s class is given an assignment to write letters to the astronauts. All the girls write to Neil Armstrong (“So cute!”) and all the boys write to Buzz Aldrin (“So cool!”). Only Mamie writes to Michael Collins, the astronaut who will come so close but never achieve everyone else’s dream of walking on the moon, because he is the one who must stay with the ship. After school ends, Mamie keeps writing to Michael Collins, taking comfort in telling someone about what’s going on with her family as, one by one, they leave the house thinking that someone else is taking care of her—until she is all alone except for her cat and her best friend, Buster. And as the date of the launch nears, Mamie can’t help but wonder: Does no one stay with the ship anymore?

It’s 1965, Los Angeles. All twelve-year-old Sophie wants to do is write her book, star in the community play, and hang out with her friend Jennifer. But she’s the new black kid in a nearly all-white neighborhood; her beloved sister, Lily, is going away to college soon; and her parents’ marriage is rocky. There’s also her family’s new, disapproving housekeeper to deal with. When riots erupt in nearby Watts and a friend is unfairly arrested, Sophie learns that life—and her own place in it—is even more complicated than she’d once thought. 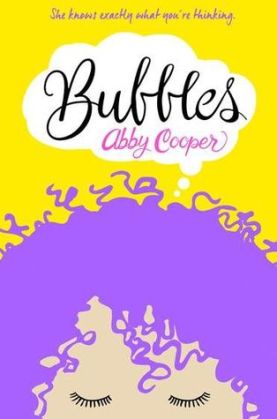 Twelve-year-old Sophie Mulvaney’s world has been turned upside down. Mom lost her job at the TV station and broke up with Pratik, whom Sophie adored. Her teacher is making them do a special project about risk-taking, so Sophie gets roped into doing a triathlon. And to top it all off, she’s started seeing bubbles above people’s heads that tell her what these people are thinking. Seeing other people’s thoughts seems like it should be cool, but it’s actually just stressful. What does it mean that Pratik wishes she and Mom were with him to eat dinner? Is her best friend Kaya really going out with their other best friend, Rafael, whom Sophie also has a crush on? And can Sophie’s mom ever go back to her old self? In this funny, heartwarming novel from Abby Cooper, BUBBLES shows readers that people are more than what they seem―or what they think.

An inspiring tale of a fourth-grader who fights back when her favorite book is banned from the school library—by starting her own illegal locker library!

It all started the day Amy Anne Ollinger tried to check out her favorite book in the whole world, From the Mixed-Up Files of Mrs. Basil E. Frankweiler, from the school library. That’s when Mrs. Jones, the librarian, told her the bad news: her favorite book was banned! All because a classmate’s mom thought the book wasn’t appropriate for kids to read.

Amy Anne decides to fight back by starting a secret banned books library out of her locker. Soon, she finds herself on the front line of an unexpected battle over book banning, censorship, and who has the right to decide what she and her fellow students can read.

Reminiscent of the classic novel Frindle by Andrew Clements for its inspiring message, Alan Gratz’ Ban This Book is a love letter to the written word and its power to give kids a voice. 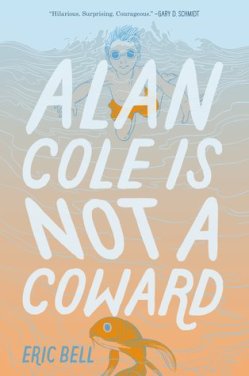 ALAN COLE IS NOT A COWARD (September 5, 2017) Perfect for fans of Tim Federle and Gary Schmidt, this is a hilarious and poignant tale about the trials of middle school when you’re coming of age—and coming out.

Alan Cole can’t stand up to his cruel brother, Nathan. He can’t escape the wrath of his demanding father, who thinks he’s about as exceptional as a goldfish. And—scariest of all—he can’t let the cute boy across the cafeteria know he has a crush on him.

But when Nathan discovers Alan’s secret, his older brother announces a high-stakes round of Cole vs. Cole. Each brother must complete seven nearly impossible tasks; whoever finishes the most wins the game. If Alan doesn’t want to be outed to all of Evergreen Middle School, he’s got to become the most well-known kid in school, get his first kiss, and stand up to Dad. Alan’s determined to prove—to Nathan, to the world, to himself—that this goldfish can learn to swim.

May the best Cole win.

Finding time to do yard work this summer is going to be a real problem! There are so many great sounding books to read. I just may have to declare an early start to the warm season.

Happy Friday and have a great weekend!

Climbing another mountain...always striving to reach the next peak in my life and career.
View all posts by Greg Pattridge →
This entry was posted in Uncategorized and tagged Abby Cooper, Alan Cole is not a Coward, Alan Gratz, Ban this Book, Bubbles, Eric Bell, I Love You Michael Collins, It All Comes Down to This, Karen English, Lauren Baratz Logsted. Bookmark the permalink.

3 Responses to FIVE FOR THE SUMMER