Posted on September 4, 2017 by Greg Pattridge

I’m off and running into my sixth year at ALWAYS in the MIDDLE. The winners of my Anniversary Giveaway of a book and gift card are:

Congratulations to all. And now onto this weeks review…

I’ve never come across an editor requesting more prison dramas for middle grade. But here we have the second one in two years with THE WARDEN’S DAUGHTER. Last year I featured ALL RISE FOR THE HONORABLE PERRY T. COOK, the story of a boy born and raised for his first eleven years in a prison where his mother is incarcerated for a crime Perry doesn’t understand. 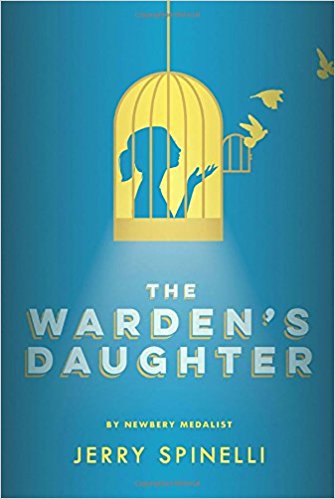 All Rise For The Honorable Perry T. Cook is a book I’d share with middle grade readers of all ages. It has a heartwarming beat in the face of desperation. I also liked THE WARDEN”S DAUGHTER but not as a middle grade reader. I felt the adult side of me clinging to the pages and would be hesitant to recommend it to children under 13.

The narration is through the eyes of Cammie as an adult looking back on the summer when she was about to celebrate her 13th birthday. Yes, back then she lived with her dad in an upstairs apartment in Pennsylvania’s Hancock County Prison. It’s 1959 and she mingles with the female prisoners in the exercise yard and longs to have a mother. Her own mom was killed, run over by a car while walking Cammie’s baby carriage across the street. Cammie survived but is in a downward spiral of depression.

There’s a murder, a suicide, and underage cigarette smoking that teachers and parents should be aware of before having the younger ones dive in to the pages. The writing is stellar and I’d take this on a long trip to enjoy before handing it off to another adult reader. It’s the best middle grade book for older readers I’ve read this year. Not so much for the 10-year-olds.

FULL PLOT (From AMAZON) Cammie O’Reilly lives at the Hancock County Prison–not as a prisoner, she’s the warden’s daughter. She spends the mornings hanging out with shoplifters and reformed arsonists in the women’s exercise yard, which gives Cammie a certain cache with her school friends.

But even though Cammie’s free to leave the prison, she’s still stuck. And sad, and really mad. Her mother died saving her from harm when she was just a baby. You wouldn’t think you could miss something you never had, but on the eve of her thirteenth birthday, the thing Cammie most wants is a mom. A prison might not be the best place to search for a mother, but Cammie is determined and she’s willing to work with what she’s got.

FIVE THINGS TO LIKE ABOUT: THE WARDEN’S DAUGHTER by Jerry Spinelli

FAVORITE LINES:  Now, in the weeks after Mother’s Day, something was changing. Enough was no longer enough. Dormant feelings stirred by a smile at a ballpark moved and shifted until they shaped a thought: I was sick and tired of being motherless.

I wanted one. And a second thought: If I couldn’t have my first-string mother, I’d bring one in off the bench.

The next lady who smiled at me?