THE SEARCH FOR THE LOST PROPHECY for Marvelous Middle Grade Monday

Posted on December 3, 2017 by Greg Pattridge

I featured the first book in the Horace j. Edwards and the Time Keepers series last Friday. 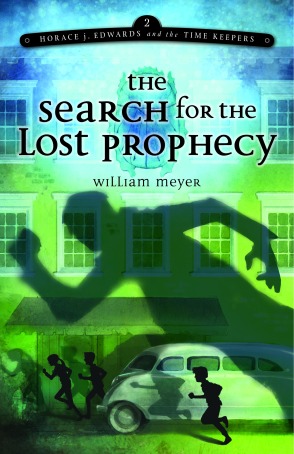 THE SECRET OF THE SCARAB BEETLE kicked things off with a trip to ancient Egypt. The time travel mystery continues with THE SEARCH FOR THE LOST PROPHECY and this time Horace and his two friends portal to 1920s Detroit.

They seek answers as to why Horace is the keeper of this strange stone scarab beetle. It allows him to go through portals but what other secrets does it hold? His grandfather would know but he suddenly died and his grandmother is in a nursing home. The answers do come in bits and pieces from his own exploring and from Herman, another time keeper he meets.

Horace discovers all is not safe both in the present and the past, setting up a hair raising  finale and a hint there may be some future time travel in the series. Great for those who can’t get enough mystery and time travel in their reading. The story moves along at a nice pace and the artists have come up with another great cover.

FULL PLOT (From AMAZON) In The Search for the Lost Prophecy, the sequel to The Secret of the Scarab Beetle, Horace continues to search for more information about the Time Keepers and his role in this secret order. After he discovers that the tree portal at his grandparents’ farm is destroyed, Horace, along with his friends Anna and Milton, travels back in time to 1920s Detroit, hoping to learn more. There they meet keeper Herman at the Scarab Club and learn that someone is threatening the Time Keepers and the order’s mission. Horace finds out that the mystical Benben Stone is being stored in a crypt back in present-day Niles, Michigan. And Horace is now tasked with keeping the sacred stone safe. Will the person or persons threatening the Order learn of Horace’s true identity?

THE SEARCH FOR THE LOST PROPHECY

“Be careful!” shouted Anna, but it was too late.

He fell between the front seats, knocking the stick shift. The car suddenly jumped forward. And in a giant flash of blue light, they were gone.

ABOUT THE AUTHOR (From Sleeping Bear Press):

As a high school history teacher for over ten years, William (Bill) Meyer) has taught almost
every historic time period from the Italian Renaissance to the American Revolution. He says, “I’ve worked in urban districts from Detroit to New York City, but also in suburban schools like Scarsdale and Bronxville. However, regardless of the place or the students no topic has piqued the imagination of my classes as intensely as the study of Ancient Egypt.” As a result of both their interest and his own childhood curiosity about the mysteries of that era, he wrote the Horace j. Edwards and the Time Keepers series. In many ways the series reflects his experiences as both a kid and a teacher. Travelling around the world to places like London, Paris, and Rome, his interest and studies of the past have come to life. For Bill, whether it is teaching in the classroom or presenting to a larger audience, the past is more than just a group of facts to be memorized and timelines to be shared; it’s a window into a deeper understanding of ourselves and the world we live in. He was born in Detroit, and currently lives with his wife in New York.