INSIGNIFICANT EVENTS IN THE LIFE OF A CACTUS

Take an armless girl, a boy with Tourette’s who barks a lot, and another boy who is 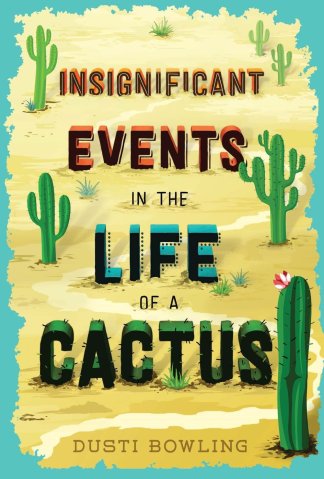 overweight and you have a story that is both funny and memorable. Aven, Connor, and Zion are the kids everyone stares at (and sometimes makes fun of), so this trio ends up eating lunch anywhere but the cafeteria.

Aven is adopted and has just moved with her parents to Arizona who are taking over the job of running an old Western theme park. Her spot on and often hilarious narration bring the story to a surprising conclusion. Along the way there is a mystery she and her new friends try to solve concerning tarantulas and the never seen person who owns the park.

With her two supportive parents, Aven learns more about herself and how to cope with the feelings of others. The times she spends with Connor and Zion are heartfelt and realistic.  I liked this one a lot and can see why it became a Cybil’s finalist.

Aven Green loves to tell people that she lost her arms in an alligator wrestling match, or a wildfire in Tanzania, but the truth is she was born without them. And when her parents take a job running Stagecoach Pass, a rundown western theme park in Arizona, Aven moves with them across the country knowing that she’ll have to answer the question over and over again.

Her new life takes an unexpected turn when she bonds with Connor, a classmate who also feels isolated because of his own disability, and they discover a room at Stagecoach Pass that holds bigger secrets than Aven ever could have imagined. It’s hard to solve a mystery, help a friend, and face your worst fears. But Aven’s about to discover she can do it all . . . even without arms

INSIGNIFICANT EVENTS IN THE LIFE OF A CACTUS

The boy looked from my face down to my non-arm area and exclaimed. “Whoa! You don’t have any arms,” in a Were you aware of this fact? sort of way.

His response to my missing arms was so direct, I had to smile. I glanced down and shrieked, causing him to jump a little. “Oh my gosh! I knew I was forgetting something today.”

ABOUT THE AUTHOR (from her web site):

DUSTI BOWLING grew up in Scottsdale, Arizona, where, as her family will tell you, she always had her nose in a book. But it wasn’t until after starting down a couple of different career paths that Dusti realized her true passion was writing. She currently lives in Carefree, Arizona with her husband, three daughters, one bobcat, a pack of coyotes, a couple of chuckwallas, several rattlesnakes, and a few herds of javelina.

Discussion guide for INSIGNIFICANT EVENTS IN THE LIFE OF A CACTUS

Climbing another mountain...always striving to reach the next peak in my life and career.
View all posts by Greg Pattridge →
This entry was posted in Reviews and tagged Dusti Bowling, female protagonists, Insignificant Events in the Life of a Cactus, Marvelous Middle Grade Monday. Bookmark the permalink.

9 Responses to INSIGNIFICANT EVENTS IN THE LIFE OF A CACTUS