A dictionary definition of “hardscrabble” says it involves hard work and struggle. The unusual word is the perfect title for this historical fiction story set in the plains of 1910 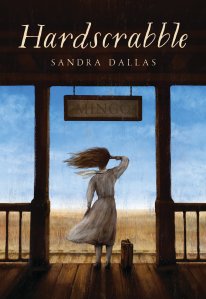 The Martins have moved to Colorado due in part to the Homestead Act. They settle on their acreage in a sod house and the parents and seven children have to endure cold winters, hail storms, grasshopper invasions, and death. One more nuisance—watch out for those rattlesnakes!

Survival is tough business. Their crops are barely enough to put enough food on the table. Many families in this time period gave up as the conditions were so severe.

Told in third person but hovering close to 12-year-old Belle the entire way, the story will touch your heart and bring a huge reminder how much easier it is for us today. Historical fiction is a tough sell for most middle graders. They want fantasy, adventure, and a fast moving story. But perhaps with some gentle guidance, those of us with a few more decades under our belt can pull in a few more of these young readers.

HARDSCRABBLE holds nothing back in the details of this tough life. It also shows how important family is and having good neighbors. A good lesson for us all, even 108 years later.

THE  PLOT (From Amazon): In 1910, after losing their farm in Iowa, the Martin family moves to Mingo, Colorado, to start anew. The US government offers 320 acres of land free to homesteaders. All they have to do is live on the land for five years and farm it. So twelve-year-old Belle Martin, along with her mother and six siblings, moves west to join her father. But while the land is free, farming is difficult and it’s a hardscrabble life. Natural disasters such as storms and locusts threaten their success. And heartbreaking losses challenge their faith. Do the Martins have what it takes to not only survive but thrive in their new prairie life? Told through the eyes of a twelve-year-old girl, this new middle-grade novel from New York Times-bestselling author Sandra Dallas explores one family’s homesteading efforts in 1900s Colorado.

Lizzie started for the door, but just then, a clod of dirt dropped from the ceiling onto her hat. She took off the hat and threw the dirt out the door. “You might want to tack muslin to the ceiling to keep the dirt from falling on you.” She gave Papa a sideways glance. “You see, there are things women homesteaders know that men don’t.”

AUTHOR QUOTE: (From the author website of Sandra Dallas) Growing up in Colorado, I was immersed in tales of homesteaders on the eastern plains.  I especially liked reading the stories of women and girls.  It seemed to me they gave up so much to follow their husbands and fathers to the lonely prairie farms.  They left behind not only family and friends but school, church, and neighborhoods, the things that gave joy and purpose to their lives. Still, they worked hard alongside the men to make a success of their homesteads, and after a time, they grew to love the open land and fresh air and were proud they had made the desert bloom.  I had always wanted to write about such people, and when Jack Martin, the husband of Diane, my best friend in junior high, gave me a collection of reminiscences of Wyoming pioneers, I knew I had my book.  Hardscrabble is a look at homesteading in the early part of the 19th century, but it is also a story of a family whose love for each other and faith in the land allow them to triumph over hardship and even death.