Be sure to also check back this Thursday for  my interview with Kathi Appelt and the tenth anniversary of her Newbery Honor book, THE UNDERNEATH. A huge giveaway, too!) But first enjoy today’s review:

Gordon Korman is not a “WhatsHisFace.” This week marks the release of his 93rd book in a writing career that began in the late 1970’s. The good news is there’s no indication he has any thought of  slowing down. Last year I reviewed RESTART, a book that made it all the way to the Cybils finalist list. While that one had multiple viewpoints, WHATSHISFACE sticks to one third person POV, or really a close third person. 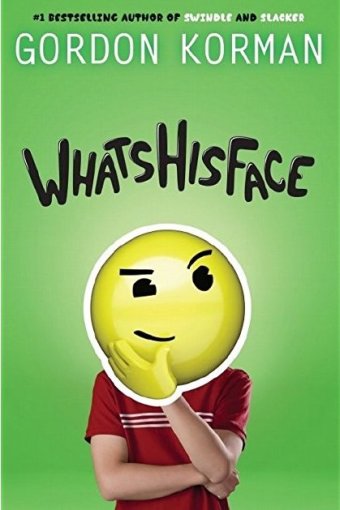 The cover showing seventh grader Cooper Vega doesn’t give a hint that none other than Shakespeare is a huge part of the plot. Cooper is always the new kid since his military dad moves the family to another town all too much. At his current school he’s known as WhatsHisFace.

When Cooper’s parents give him the hottest cell phone on the market as a gift, it’s great and all, until he discovers a ghost living inside the phone named Roderick. He too is a 13-year-old kid—one who lived in the seventeenth century. Roderick claims he was the actual writer of Romeo and Juliet and further accuses Shakespeare of stealing his manuscript after Roderick died an early death.

There has long been speculation and debate whether Shakespeare actually wrote all of his plays. Korman approaches it from a modern day perspective and the explanation is quite plausible how Romeo and Juliet came to be. Nevertheless, its up to Cooper to keep his ghostly friend hidden, even though Roderick learns how to escape for short trips away from his unusual entrapment. His goal is to become known as the true author of the play.

You learn much about the Bard along with Romeo and Juliet. You’ll also enjoy an offbeat story of friendship, first crush, and finding a way to not be invisible to the rest of the world.

“For never was a story of more woe; Than this of Juliet and Romeo.”

The same could be said for Cooper and his 21st century problems. Keep those stories coming, Mr. Korman.

GORDON KORMAN’S AUTHOR WEB SITE The master story teller also has an impressive web site. Of course you’ll find details on his books, but there is also GORDON’S BLOG, a READERS FORUM, and MORE RESOURCES. The site is a model for other authors in need of a fix for their own page.

5 Responses to WHATSHISFACE by Gordon Korman