HOW I BECAME A SPY

Having just finished several non-fiction books on various aspects of World War II, I welcomed the chance to read this historical fiction story set in 1944 London. It turned out to be time well spent. 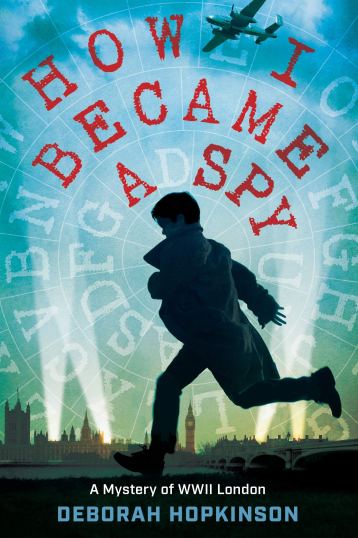 Thirteen-year-old Bertie lives with his dad, a caretaker of a boardinghouse for single policemen. His mom and brother are somewhere else, not entirely made clear until later in the story. Danger is in the air with the Nazi’s much too frequent bombing of the city. Bertie is a civil defense volunteer, a so-called messenger. He warns others of danger and points them to safety. On most missions his trusty spaniel, Little Roo, is by his side.

Bertie’s first person narration is compelling and realistic. A red notebook full of codes and a bicycle collision with an an American girl his age gets the story rolling. She takes off and soon after Bertie finds an unconscious woman  He drapes his coat over her and goes to get help. A short time later he returns and she’s gone along with his jacket.

The coded notebook turns out to be the key to the mystery. One that will lead right to D-Day. The thirty-three chapters fly by as Bertie tries to figure out the messages with help from his friends David and Eleanor, the American girl he encounters at the start of the tale. Adventurous and always page turning, How I Became a Spy, weaves a fictional story together with real events of the time. It will entertain young readers while sneaking in a little bit of history. My favorite type of writing.

HOW I BECAME A SPY

THE OFFICIAL BLURB (From AMAZON)

Bertie Bradshaw never set out to become a spy. He never imagined traipsing around war-torn London, solving ciphers, practicing surveillance, and searching for a traitor to the Allied forces. He certainly never expected that a strong-willed American girl named Eleanor would play Watson to his Holmes (or Holmes to his Watson, depending on who you ask).But when a young woman goes missing, leaving behind a coded notebook, Bertie is determined to solve the mystery. With the help of Eleanor and his friend David, a Jewish refugee–and, of course, his trusty pup, Little Roo–Bertie must decipher the notebook in time to stop a double agent from spilling the biggest secret of all to the Nazis.From the author of The Great Trouble, this suspenseful WWII adventure reminds us that times of war call for bravery, brains and teamwork from even the most unlikely heroes.

Deborah Hopkinson is the author of more than 50 books for young readers including picture books, middle grade fiction, and nonfiction. At schools and conferences she helps bring history and research alive. Her work is well-suited for STEM, STEAM, and CCSS connections.

Forthcoming titles include D-DAY:The World War II Invasion that Changed History, What is the Women’s Rights Movement? and Under the Bodhi Tree. She also contributed to a young adult collection, Fatal Throne: The Wives of Henry VIII Tell All (Spring 2018).

Deborah received a B.A. in English from the University of Massachusetts and an M.A. in Asian Studies from the University of Hawai’i at Manoa. She lives near Portland, OR with her family and a menagerie of pets. Her husband, Andy, is a winemaker and artist; her son, Dimitri, is a photographer and landscaper; her daughter, Rebekah, is a teacher and chalk artist, and her toddler grandson, Oliver, is simply extraordinary!

(For more about Deborah’s books and appearances, visit her website)

I received an ARC in exchange for  my honest review.

10 Responses to HOW I BECAME A SPY