Start with a little Hardy Boys, add in a light dose of The Phantom Tollbooth, and sprinkle in a little Ghostbusters to top off the recipe. The result is a rollicking adventure with a pair of endearing cousins. Humor abounds as does a 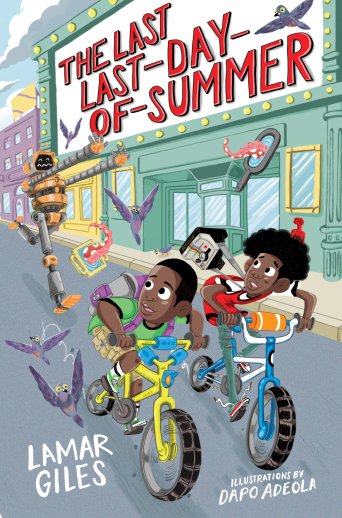 Otto and Sheed Alston are legendary in their Logan County, Virginia community. These budding sleuths have solved some pretty wild and wacky cases. They long for one more adventure on the last day of summer break (and another key to the city), but never expect to find the whole town unable to move in some sort of time stoppage. Residents are stuck in their last position  but can carry on a conversation. Otto and Sheed are unaffected, still able to move, and set out to unfreeze the town.

Otto takes frequent notes, helping the two deduce what is going on. Depending on the situation, Sheed can either be laid back or jump in and get it done kind of guy. Filled with crazy characters and a touching bond between these two cousins, the story will appeal to both girls and boys. The third person narration stays close to the boys even when the evil doings keep them separated at times. The middle grade stage is ready for a pair of new heroes and what better ones than Otto and Sheed.

Otto and Sheed are the local sleuths in their zany Virginia town, masters of unraveling mischief using their unmatched powers of deduction. And as the summer winds down and the first day of school looms, the boys are craving just a little bit more time for fun, even as they bicker over what kind of fun they want to have. That is, until a mysterious man appears with a camera that literally freezes time. Now, with the help of some very strange people and even stranger creatures, Otto and Sheed will have to put aside their differences to save their town—and each other—before time stops for good.

Lamar Giles is a well-published author and a founding member of We Need Diverse Books. Lamar has two novels forthcoming in 2019: his debut middle grade fantasy THE LAST LAST-DAY-OF-SUMMER (Versify / HMH) and his fourth YA thriller SPIN (Scholastic).

I received an ARC in exchange for  my honest review.

You only have six days left to enter National Geographic’s huge giveaway to launch the second book in the Explorer Academy Series. ALWAYS in the MIDDLE and four other blogs hosted the tour last week. A separate Rafflecopter entry form is being used for each site so a total of five winners will win all the great items pictured below.  Here’s my post with all the details or head right over to the Rafflecopter entry form to sign up.

10 Responses to THE LAST LAST-DAY-OF-SUMMER