I’ve never done business with Cricket Wireless, but I know more about that company than I do the sport of Cricket—and the sport serves as the backdrop of this new book by one of my favorite authors, Gary D. Schmidt (The Wednesday Wars; Okay for Now and many others). 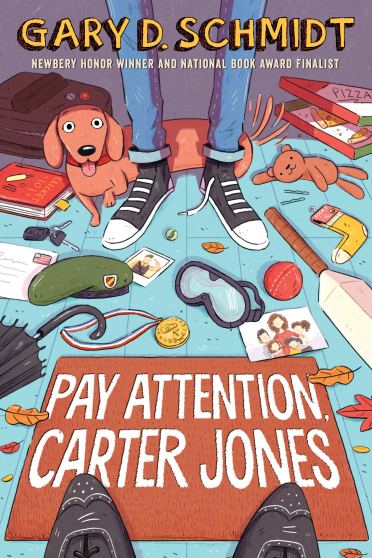 The old adage is don’t judge a book by its cover and this one made me think I was going to be reading about a disorganized kid who leaves a mess wherever he goes. One who is probably being stared at by his disapproving father. Okay, not so fast—

Carter Jones is a twelve year old boy who lives with his mother and three younger siblings in Marysville, New York. His father is an Army Captain stationed overseas. The grandfather Carter never knew has died and left them the services of a real live Butler, a Mr. Bowles-Fitzpatrick. And so the story begins with the Butler on their doorstep.

Carter is not too happy this guy is trying to turn him into a gentleman’s gentleman. This includes teaching him the sport of Cricket in a football crazy town. Each chapter begins with a little background on what is involved with the sport. I was thoroughly confused with terms like wickets, bails, and a googly. The details come out in frequent practices the Butler conducts. Yep, still confused. I’m more of a visual learner so if you plan on reading this book, you might want to take a look at a video explaining the game. I found a good one here.

Carter eventually warms up to the sport and to the Butler, who unbelievably allows Carter to drive his Bentley around town. I doubt he would have gotten two blocks in my neighborhood before someone noticed. Despite the subtle bits of humor between these two and learning a new sport, this is one sad story. Coping with loss as never been presented in such an unusual way. Tread carefully and be ready to hold back the tears.

The Official Word on the Plot (From Houghton Mifflin Books)

Carter Jones is astonished early one morning when he finds a real English butler, bowler hat and all, on the doorstep—one who stays to help the Jones family, which is a little bit broken.

In addition to figuring out middle school, Carter has to adjust to the unwelcome presence of this new know-it-all adult in his life and navigate the butler’s notions of decorum. And ultimately, when his burden of grief and anger from the past can no longer be ignored, Carter learns that a burden becomes lighter when it is shared.

Sparkling with humor, this insightful and compassionate story will resonate with readers who have confronted secrets of their own.

Climbing another mountain...always striving to reach the next peak in my life and career.
View all posts by Greg Pattridge →
This entry was posted in Middle Grade Book Reviews, New Release and tagged Gary D. Schmidt, Pay Attention Carter Jones. Bookmark the permalink.