IT”S MARVELOUS MIDDLE GRADE MONDAY with a feature and GIVEAWAY of THE ECHO PARK CASTAWAYS!

Nevaeh, Vic, and Mara are veterans of the Los Angeles foster care system. For over a 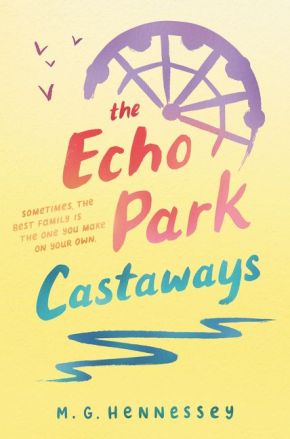 year they’ve been staying with Mrs. K in Echo Park. Vic spends most of his time living in a dream world, Mara barely speaks, and Nevaeh is forced to act as a back-up parent. Though their situation isn’t ideal, it’s still their best home yet.

Then Child Protective Services places Quentin in the house, and everything is turned upside down. Nevaeh really can’t handle watching over anyone else, especially a boy on the autism spectrum. Meanwhile, Quentin is having trouble adjusting and attempts to run away.

So when Vic realizes Quentin just wants to see his mom again, he plans an “epic quest” to reunite them. It could result in the foster siblings getting sent to different group homes. But isn’t family always worth the risk?

The technique of using three alternating narrators was previously used in MS. BIXBY’S LAST DAY by John David Anderson. To do it successfully you need compelling characters and M.G. Hennessey pulls it off with Nevaeh, Vic, and Quentin. They take turns in each chapter and the story moves forward at a rapid pace.

Heartbreaking at times, you feel the plight of these kids as they’ve arrived in the foster care system under different circumstances. Their shared wish is to have a a home where they feel wanted. For now they’ve been thrown together to live in Mrs. K’s house who is not the most tuned in foster parent. This leaves eighth grader Nevaeh to watch over the younger ones.

They are a handful with Vic living in his made-up spy world and ADHD; Quentin with a developmental disorder known as Aspergers—his odd behavior has everyone on edge; Finally there is the youngest, Mara, who is quiet, speaks little Spanish, and almost no English.

The quest to find Quentin’s mom takes up most of the pages. It’s a compelling read as the four take a rather difficult route find her. The ending comes quick and it was both sad and heartwarming. What little it takes to bring these four together. It is something most kids would take for granted (A hint is on the cover).

The adventure they go on is both believable and page turning. You’ll be wishing for more from this band of castaways. The time you do spend with them is one you won’t soon forget. Highly recommended for those who enjoy modern contemporary dramas.

M. G. Hennessey loves Star Wars, the San Francisco Giants, strawberry ice cream, and dancing (not necessarily in that order). If she could choose one superpower, it would be flying. A supporter of the Transgender Law Center, Gender Spectrum, and the Human Rights Campaign, she lives in Los Angeles with her family. Visit her on the web.

I received and ARC for my honest Review. Comment below…and you’ll be entered into a GIVEAWAY for a new hardback edition of this endearing story. Entries are accepted through July 14th and the winner will be announced next Monday.

12 Responses to THE ECHO PARK CASTAWAYS