MIGHTIER THAN THE SWORD—THE EDGE OF THE WORD

Posted on November 3, 2019 by Greg Pattridge 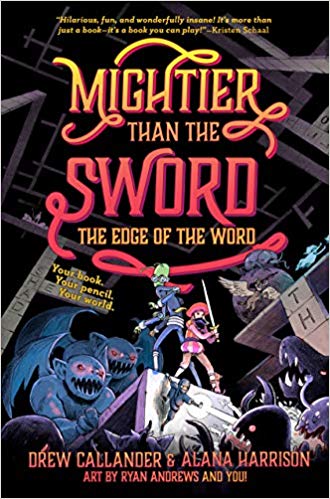 I saved the world once but now I have to do it again. Such is the premise for the sequel, MIGHTIER THAN THE SWORD—THE EDGE OF THE WORD. I previously reviewed the first book last August. This is a series like none other and my review today just had to take the same path.

As I began this piece for MMGM, a mysterious force crept into my fingers. Three seconds later the template appeared below. The design is similar to ones used at crucial times in the book to keep the story moving from your own perspective. All I had to do was fill in the blanks to complete my review (feel free to use after reading the story yourself).

MY COMPLETED FILL IN THE BLANKS REVIEW: 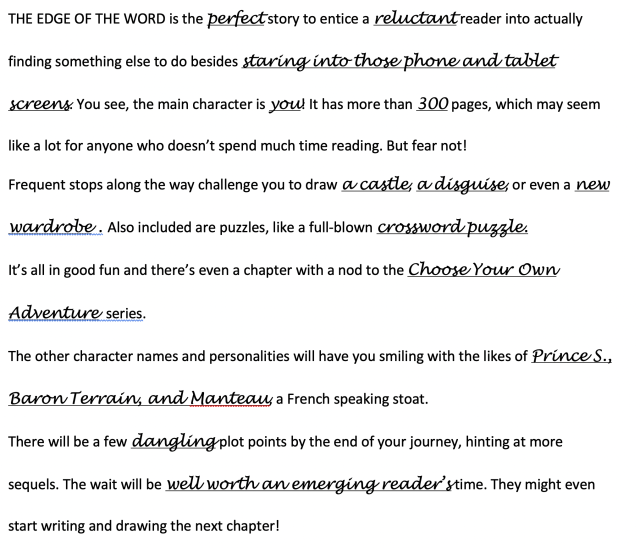 I seem to be back to normal again and can tell you both books in the series are available from Penguin Random House or your favorite children’s book store. Here’s their official teaser on the story:

The second book set in Astorya places you back in the driver’s seat. You’re a real human being (we assume), and in this fictional world, that makes you a superhero. Armed with your trusty pencil, you have the power to create. What you write, draw, or scribble in the book becomes part of the story!

With Queen Rulette gone, and Astorya returning to normal, you decide to journey to Astorya’s Other Side, a place of monsters and mayhem, to hide the original Original forever. Surely nothing bad could happen to Astorya’s precious document there, right? But when the plan goes awry and digital doppelgangers are unleashed on the world, once again only you can save the day.

Write, draw, and puzzle your way through a hilarious adventure story that is unique to every reader! And, most importantly, prove that the pencil is mightier than the sword.

About the Authors (From Amazon)
DREW CALLANDER:
“Probably the most talented writer of all time.”
-Drew’s Mom
Drew was born in Ohio to two people from Ohio. Since then, he has lived in Chicago, Los Angeles, New York City, Ireland, and (currently) the Netherlands. He did this out of wanderlust, not to avoid paying taxes. He also managed to marry the woman of his dreams/writing partner, have a baby, and adopt a street cat who can do tricks like a dog.
Drew taught creative writing to kids in NYC and LA for over 10 years. During that time, he got to experience the wonderful absurdity of kids’ stories. One day, he and Alana talked about how funny it would be if there were a place where all those stories came to life. MIGHTIER THAN THE SWORD is the story of that place.
ALANA HARRISON:
Alana found her mind about ten years ago. It had gotten lost in a very hard to reach, dangerous place. But that’s another story altogether. The important thing is that shortly thereafter, she met Drew and they have entirely too much fun together. They love creating characters together, writing, reading aloud, being loud aloud, doing voices and making faces. If you’re curious, none of those faces have stuck. Not even the really weird ones.
Alana’s terrible at moving, but just to make sure of that, she’s schlepped herself (as well as her baby, cat, husband, and luggage) to three different countries in the last two years. But she’s still not as adventurous as her father, who managed to live in the real Amazon (not this website) for several years with only a canteen, a machete, and a treasure map. (But that’s also another story altogether). Alana hopes to get to Ecuador some day and live in the jungle (in spite of being really terrible at moving).
*******************************
Comments can be entered below and are much appreciated!

Climbing another mountain...writing middle grade novels.
View all posts by Greg Pattridge →
This entry was posted in Middle Grade Book Reviews and tagged Alana Harrison, Drew Callander, Marvelous Middle Grade Monday, Mightier Than The Sword, The Edge of the Word. Bookmark the permalink.