MAX EINSTEIN—REBELS WITH A CAUSE

Posted on December 8, 2019 by Greg Pattridge

Be sure to check out all the other MMGM bloggers today. 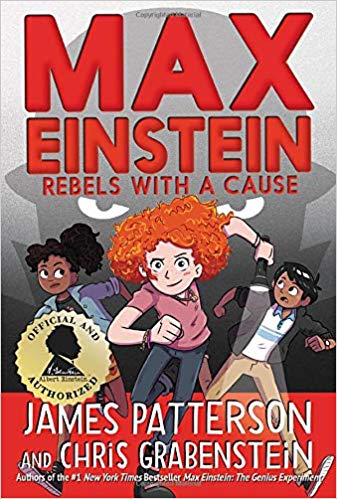 I was a little apprehensive starting with the second book in the series (Max Einstein The Genius Experiment began it all), but this turned out to be a brand new adventure. The plot is unbelievable, but if it gets kids to read like James Patterson promises in his short I’m not running for President speech then I’d say he has succeeded.

Max is smarter than your average university student and she’s only 12. Her richer than rich boss is 14.  She’s banded together with other geniuses to help the world with whatever problem they need solved. The globe trotting adventure starts in the United States then moves to Ireland and India where Max and her friends attempt to solve a city’s water problem.

Chasing after her is a robot boy along with the leader of The Corp, an evil group out to make money and stop these kids from trying to make a difference. What they really want is for Max to come work with them. They promise in exchange for her loyalty that they can reveal where Max came from and why she shares the famous scientist’s last name.

The fifty seven chapters flew by and I completed it in a few days. Emerging readers will enjoy the short chapters and the occasional detailed black and white illustrations. A few plot point are left dangling so be prepared for a book three likely next year.

Max Einstein’s typical day is not your average 12-year-old’s. She…- TEACHES classes at a New York college- Dodges KIDNAPPING attempts with her best friends- Goes on SECRET MISSIONS for her billionaire boss- Has a MYSTERIOUS CONNECTION to Albert Einstein. Just a day in the life of the Change Makers Institute’s top agent! What does an Irish town and a village in India have in common? A water crisis that only a group of kid geniuses can fix! Max and her CMI friends attempt to use their smarts to find solutions, but it’s hard to save the world when you’re trying not to be kidnapped! A greedy corporation with an eye on capturing Max seems to know their every move. It’s almost like the bad guys have a spy inside the Change Makers…

MAX EINSTEIN REBELS WITH A CAUSE

by James Patterson and Chris Grabenstein

The battalion chief, whose badge ID’d him as Morkal, stared at her

“You heard the girl,” Chief Morkal barked. “Make me a hot air balloon out of a garbage bag! Stat!”

James Patterson is the world’s bestselling author and most trusted storyteller. He has created many enduring fictional characters and series, including Alex Cross, the Women’s Murder Club, Michael Bennett, Maximum Ride, Middle School, and I Funny. Among his notable literary collaborations are The President Is Missing, with President Bill Clinton, and the Max Einstein series, produced in partnership with the Albert Einstein Estate. Patterson’s writing career is characterized by a single mission: to prove that there is no such thing as a person who “doesn’t like to read,” only people who haven’t found the right book. He’s given over three million books to schoolkids and the military, donated more than seventy million dollars to support education, and endowed over five thousand college scholarships for teachers. The National Book Foundation recently presented Patterson with the Literarian Award for Outstanding Service to the American Literary Community, and he is also the recipient of an Edgar Award and six Emmy Awards. He lives in Florida with his family.

Winner of all sorts of awards, Chris writes fast-paced and fun page-turners. He’s also a playwright and screenwriter not to mention a former advertising executive and improvisational comedian. Sometimes he sleeps.
Chris started writing a long time ago. He and his four brothers used to put on skits and puppet shows in the basement of their home in Buffalo, New York. Their mom and dad were the only paying customers. Admission was a nickel. They usually earned ten cents a show. (For much more about Chris Grabenstein visit his web site)

8 Responses to MAX EINSTEIN—REBELS WITH A CAUSE