Posted on February 9, 2014 by Greg Pattridge 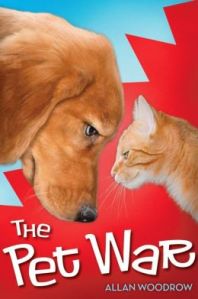 First off, I have a love/hate reaction with the cover. Scholastic knows their marketing in that kids (and many big kids) love a good story about animals. The dog and cat are cute, (that’s why I picked it off the shelf) and there’s a similar cute image on the back. The problem I have is that  the obvious ploy to sell this book slightly misrepresents what the book is about.

Stare at the cover and see if you agree. My first reaction:  It’s a tale of two pets in one house or in a neighborhood fighting for dominance. Maybe even told from the dog and cat’s view point. I’m not much for talking animals so I started to put the book back on the shelf. Before it got there I decided to read the first page and discovered it was about Otto, an eleven-year-old dog lover, and the sibling rivalry with his 12-year-old sister, Lexi, a cat lover. They have no pets in their house so the slightly overwhelmed mom decides to accept Lexi’s idea for a contest–whoever first earns $500 in one month, is rewarded with the pet of their choosing. I would have put the two main characters on the cover with one eye on each other and the other on the prize–a dog or cat staring at them through the pet shelter’s window. It’s a story about sibling rivalry, responsibility, and goal setting rather than two animals in a face-off… Okay, I’m done ranting about cute covers, especially since this one caused me to read the book in the first place. Besides, I actually love Alan Woodrow’s tale, though it would have been just as good, maybe better, at 45,000 words.

FULL PLOT (From Amazon): THE PET WAR is a hilarious story about the timeless battles of dog vs. cat, brother vs. sister, know-it-all vs. know-nothing.

Eleven-year-old Otto wants a dog. His twelve-year-old perfect sister, Lexi, wants a cat. Their mother, who works very long hours as a nurse, wants neither. Pets are expensive so who’s going to pay for everything? And what happens to the pet when the siblings are at their dad’s for the weekend?

Otto has an idea. What if he got a job and earned enough money to pay for the dog? Then Lexi has to open her big mouth. She proposes that whichever sibling can raise enough money first will decide which pet they get. Oddly enough, their mom and dad agree.
With Otto and Lexi each out to defeat the other, their business plans become more elaborate and involved. As the competition gets fiercer, the stakes get higher, and the battle lines have been drawn, so let the Pet War begin. . . .

It’s hard to pretend you’re twenty-two when you’re walking a bike and you’re about eight years away from shaving.

8 Responses to THE PET WAR for Marvelous Middle Grade Monday