I am thrilled to be the seventh stop on the Blog Tour for It’s NOT Just A Dog, a new novel by Pam Torres. Thanks for inviting me, Pam! The full schedule is below in case you missed the start and the tour roams the Internet for a whole month. I’ll do my regular MMGM look at It”s NOT Just A Dog, but then keep scrolling for more links, author background, and a fun contest.

Yes, I admit, I’m a dog person. If you aren’t, this story will still touch your heart with its underlying themes. The tale (tail) has connections to some big issues involving our canine friends along with growing up problems facing our protagonist, Madison. The novel is adventurous and would make a great read a loud. This is the second book in the Madison Project series but don’t worry, it stands on its own.

WHAT IT’S ABOUT: School’s out for the summer and straight-talking Madison and her friend Cooper have big plans 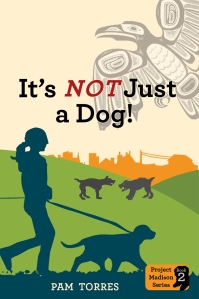 for the summer: working at the kennel, training service dogs and creating a dog-walking business—besides writing her dog-blog. Her stepdad has agreed to make Lilly, Madison’s foster puppy, a permanent member of the Morgan family, and Madison wants to make the adoption special.

When an injured dog is abandoned, Madison’s determined to discover the truth about the orphaned dog. To crack this crime she’ll have to sneak around some shady characters. It’ll be tricky since her dad isn’t happy about her animal detective activities. Her promise not to get into trouble won’t be easy. Madison convinces Cooper to strike out on their own, but Lilly is dognapped and Madison finds herself locked in a shed with no way out. She regrets her crime-fighting obsession and realizes her snooping has endangered everyone she cares about. Cooper rallies an unlikely group of rescuers to bust her out.

In the end Madison learns she can depend on her friends and her stepfather. And when it comes to people and dogs, relationships are never simple, and a dog is never—JUST a dog!

FIVE THINGS I LIKE ABOUT IT”S NOT JUST A DOG

Pretty soon all these questions were chasing each other by the tail in my mind. I was lost in a whirlwind of what ifs.

You can find It’s NOT Just A Dog! at the online stores below:
Amazon
Barnes And Noble
IndieBound

About The Author: Pam Torres

Pam Torres was born in Logan, Utah and did most of her growing up in Prairie Village, Kansas. Besides playing Dorothy during 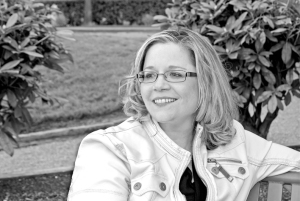 tornado weather and digging Peter Pan-like underground forts she also played piano and ran cross-country. She started her family early, and had five energetic and creative children, and returned to school when the last one was four. She has fond memories of reading and playing with her children in between hefty amounts of volunteering at church and their schools. Several of her favorite memories are doing writers’ workshop, updating the art docent program, recruiting volunteers, working as the parent liaison for the curriculum team, publishing articles in the newsletter and directing a very popular after-school art club.

Writing was the one constant in her life through all the struggles of single parenthood, stepparent issues and bringing a large family together. She continued to write her brains out in hopes of writing full-time one day. After five years in sales, she quit her well-paying job to write. Her supportive husband is her biggest cheerleader and she frequently acknowledges that she couldn’t have done it without him.

The Project Madison Series is her debut middle-grade series. She organized Project Madison around its release and is donating 10% of her proceeds to the ASPCA®, animal shelters and other programs to benefit homeless or abused animals.

LINK to a Rafflecopter giveaway

Grand Prize- Set of illustrations signed by the illustrators, set of bookmarks, official Netta recipe card with biscuit mold, full set of magnets, set of stickers, signed hard copies of both books in the series, and a dream catcher.

First Prize- 3 illustrations signed by the illustrators, bookmarks, official Netta recipe card with biscuit mold, full set of magnets, set of stickers, hard copies of both books in the series.

Swag Packages- One 5×7 signed illustration, bookmarks, magnets, stickers, an ebook in the format of your choice.

Facebook Page Contests- During the month of June the Project Madison Facebook Fan Page will be conducting contests and giveaways, so be sure to check there frequently for a chance to win some great prizes.

Anyone who emails (torres dot pam3 at gmail dot com) a JPG of a tween holding my book, a student or relative will receive a personalized letter from Madison and signed by Lilly dog.

In addition, they will also be entered into a special drawing for an entire classroom to receive copies of the book and a visit from the author. (Sorry, this is for Washington State Teachers only.) One entry per child, per picture. Be sure to include your school name, teachers name and contact information.

Climbing another mountain...writing middle grade novels.
View all posts by Greg Pattridge →
This entry was posted in Uncategorized and tagged Blog Tour for It's NOT Just A Dog, Middle grade, MMGM, Pam Torres. Bookmark the permalink.

10 Responses to A Special MARVELOUS MIDDLE GRADE MONDAY: Blog tour for It’s NOT Just A Dog