I’ve once again gotten way ahead on reviews so I’m throwing in an occasional midweek bonus.

Earlier this  year I reviewed the first book in this series TIME SQUARE- THE SHIFT. It’s the set-up for this second book as four time traveling teens take on their first mission to find a person gone missing after an untimely shift in the master clock. In book one we find out the mess-up with our ticks and tocks came about because the father of two of these kids discovered an obelisk not knowing that inside was the home for how time is kept – a place called Time Square. If you jump right in and have not read the first in the series, don’t worry as author, S.W. Lothian, brings you up to date in the first third of this adventure. 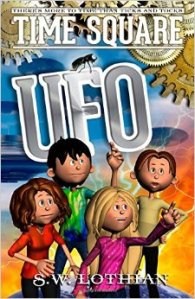 The action focuses mostly on 1947 Roswell, New Mexico where the teens are sent to find and bring back a wayward time traveler. That’s the site of a real life event known as the Roswell UFO Incident. There is also another plot thread set in 1930 Washington D.C. where the obelisk has been stolen by rival Sultan Peppercorn causing some very chilly havoc at Time Square. So far bumbling agent James Blonde has come up empty in his attempts to resolve this situation.

If you like wildly inventive characters, funny dialog, and time travel with a bit of history thrown in, then look no further than the TIME SQUARE series.

FULL PLOT (From Amazon):  The effects of the Shift have caused havoc at Time Square. Time itself is in danger of imploding and Operation Slingshot has been activated to save the day. Team ELMR embark on their first mission to locate and rescue the first of the missing travellers.

Mission Brief: Readings indicate that the target traveler has possibly been captured by a brilliant, but eccentric, scientist who is investigating reports of extra-terrestrials that have crashed in the Roswell area.

Due to this, it is essential that the target is located and rescued before he unwittingly reveals our secret. If the secret of time-travel is revealed to such a random mind, then it could spell disaster and have a huge impact on the world.
FIVE THINGS TO LIKE ABOUT TIME SQUARE – UFO by S.W. Lothian

FAVORITE LINES: They clumped together like overcooked rice and edged into the eerie grey beyond the reach of the streetlight, towards the voice.

QUOTE FROM AUTHOR: “I love hearing from my readers.  One of the strangest things about writing is the huge length of time from when you pen the words on the page until the time that a reader engages in the story.  It’s very fulfilling when readers contact me to share their thoughts and questions about my books.” SOURCE