First off I have the winner of last week’s copy of CONFESSIONS OF AN IMAGINARY FRIEND. Congratulations to  BIBI BELFORD.  She is the MG author of the touching and enjoyable CANNED AND CRUSHED. I’ll get that out to you this week, Bibi. Now on to today’s review…

When I first saw the cover for this book, I was certain that the pages inside would be a graphic novel full of 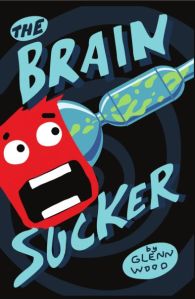 cartoonish pictures. Wrong. What I found was a science fiction type story set in a contemporary setting with three very compelling teens. First we have our main protagonist, Callum, a boy who has spent his life in a wheelchair. Then there’s Sophie, a wizard at building things, and Jinx, who is trying desperately to control his own bad luck.

THE BRAIN SUCKER was first released in Australia three years ago, followed by Great Britain in 2014, and finally Canada/U.S. in 2015. The book has also been nominated for the 2015 Sakura Medal in Japan (a book award voted on by children and young adults in Japan).

It is a quick read that moves along at a hearty pace as our trio of heroes attempts to stop an evil man from sucking the goodness out of every brain in the city. His secret device has already been successful at turning the nicest people into complete, shall I say, morons.

Reluctant readers will gravitate toward text that has space above and below each line. The story will appeal to 8-12 year-old boys and girls who want to escape on a thrilling adventure to save the world.

Evil genius Lester Smythe has a black heart. He’s invented a dangerous brain-sucking machine that removes the goodness from its victims. Now he’s using it to rid the world of all human kindness. But Lester didn’t count on Callum McCullock and his two best friends, engineering whiz Sophie and Jinx Paterson, the world’s unluckiest boy. The trio vow to foil Lester’s evil plan but can they stop him before things go from bad to disastrous?

FIVE THINGS TO LIKE ABOUT: THE BRAIN SUCKER by Glenn Wood

Callum could barely contain his excitement. If his new chair was as good as he hoped, it would make a big difference in his life. When you’re stuck in a wheelchair, mobility is everything, and the Thunderkit looked like it could conquer mountains, or the very least the steps outside the corner shop.

“A great number of people assisted in bringing this book to print, so if you don’t like it, they’re to blame.”

Glenn Wood is an award winning copywriter and author who has four published books to his credit. These include his popular autobiographical novels – The Laughing Policeman and Cop Out – and two middle school books The Brain Sucker and The Bully Chip.

The U.S./Canada Edition of THE BRAIN SUCKER is now available on AMAZON. I know, don’t judge a book by its cover, but I do like the previous covers better:

13 Responses to THE BRAIN SUCKER for Marvelous Middle Grade Monday