I’ve arrived a tad late to the party, but with books that doesn’t matter as the stories are always 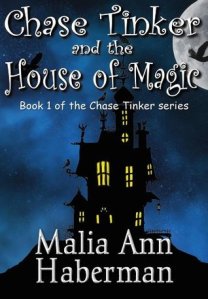 Chase is a twelve-year-old boy who turns thirteen not too far into his opening adventure. He and his younger brother are whisked away from New York by a grandfather they have never met. He teleports them back to his home in Seattle and a house full of magical rooms. What fun there is exploring as each of the room has a different magical power. Chase and his brother also learn that each of the Tinkers have a personal power that surfaces when they turn 10 1/2, which explains the odd powers they’ve recently been using.

More questions surface about certain rooms that are locked, two cousins with different intentions, an aunt who returns after trying to save the boy’s father from an evil force, and the grandfather who hasn’t quite told them the whole story behind the magic. It is an intriguing story line and one that will have you flipping the pages for more. The ending has a great twist that propels the story into the next episode.

If you decide to make the leap to read this series you’ll find loads of fun (and evil) magic, thrilling turns when least expected, and an endearing main character in Chase Tinker.

FULL PLOT : Thirteen-year-old Chase Tinker can’t understand why he has the power to move things with his mind. Besides that, his dad has been missing for over a year, causing his mom to be too upset to pay much attention to her sons, so now he’s been busted for shoplifting. As if this isn’t enough to worry about, his younger brother Andy suddenly has a weird magical ability too. Can things get any crazier? Chase thinks.

Then, a grandfather they thought to be long dead arrives at their door. He wants Chase and Andy to come visit him so they can learn about their supernatural heritage, and why they have magical powers in the first place.

The boys soon find out that Grandfather, along with their cousin Janie, lives on a remote island in the middle of Puget Sound in an out-of-this-world house where fantastic magic can be found in practically every room, stairway and corridor. Chase can’t believe their dad has been keeping so much from them.

It’s an even bigger shock when Chase learns that all their magic is controlled by a powerful and mysterious Relic in the attic, and if anything happens to this Relic, every bit of Tinker magic will be lost forever. He’s even more disturbed when he learns his family has a dark and powerful enemy that is determined to steal all their magic, their house and their Relic.

Now Chase must find a way to stop these evil beings, while at the same time figuring out what has happened to his dad, unraveling even more Tinker lies and secrets and not letting on that he has a huge crush on the housekeeper’s daughter.

FIVE THINGS TO LIKE ABOUT: CHASE TINKER and THE HOUSE OF MAGIC by Malia Ann Haberman

FAVORITE LINES: (This one hints at what is in store for these two brothers)

With a flick of his finger, a tall glass of iced tea with a slice of lemon and a tiny blue umbrella popped onto the table.

The boys gawked as if they’d just seen a green, polka-dotted extra-terrestrial fly through the window. Andy almost fell of his chair. “How’d you do that?” he gasped.

It was grandfather’s turn to look wide-eyed. “You mean you have never seen real magic? Not even your own?”

AUTHOR QUOTE: I keep Christmas lights up in my house year round. I know it’s weird, but they’re so colorful and festive. Besides, I’m sort of afraid of the dark and they make lovely night lights. 🙂

Make a comment if you have time. I enjoy reading all of them.  You’ll find the comment link right under the title of this review.