The title is not a late addition to the Halloween season. Instead its the nickname for the 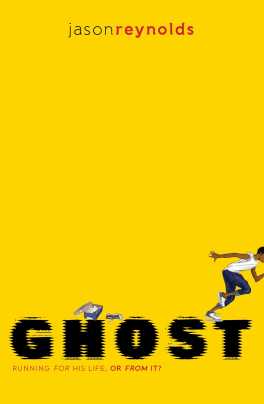 main character, Castle Cranshaw. He’s a runner for more reasons than you’d expect. His attitude at school has created a thick file of wrong doings.

His home life does not include a father anymore, but Mom does the best job she can working and doing everything to help her son succeed.

Ghost’s transformation begins when he finds a local track team. He’s invited to join and soon finds it to be the best decision he ever made. He continues to stumble in his life’s choices, but his coach and teammates are there for him.

This book is the first in the Track series about a a fast but fiery  group of kids who have a shot at the Junior Olympics. They have much to prove to themselves and teammates before this will be remotely possible. Told in first person, you’ll feel for the rough life Ghost has had through his street wise words in a tough neighborhood.

I’m ready for the second in the series to arrive ASAP. I hope it comes as fast a Ghost runs the one hundred.

FULL PLOT (From SIMON & SCHUSTER) Ghost wants to be the fastest sprinter on his elite middle school track team, but his past is slowing him down in this first electrifying novel of a brand-new series from Coretta Scott King/John Steptoe Award–winning author Jason Reynolds.

Ghost. Lu. Patina. Sunny. Four kids from wildly different backgrounds with personalities that are explosive when they clash. But they are also four kids chosen for an elite middle school track team—a team that could qualify them for the Junior Olympics if they can get their acts together. They all have a lot to lose, but they also have a lot to prove, not only to each other, but to themselves.

Ghost has a crazy natural talent, but no formal training. If he can stay on track, literally and figuratively, he could be the best sprinter in the city. But Ghost has been running for the wrong reasons—it all starting with running away from his father, who, when Ghost was a very little boy, chased him and his mother through their apartment, then down the street, with a loaded gun, aiming to kill. Since then, Ghost has been the one causing problems—and running away from them—until he meets Coach, an ex-Olympic Medalist who blew his own shot at success by using drugs, and who is determined to keep other kids from blowing their shots at life.

FIVE THINGS TO LIKE ABOUT: GHOST by Jason Reynolds

FAVORITE LINES:  Castle Cranshaw,” I said, then quickly clarified, “But everybody calls me Ghost.” By everybody, I meant nobody except me. That was my self given nickname. Well, halfway, self given. The night me and Ma busted into Mr. Charles store, Mr. Charles looked at us like he was looking at two ghosts. Like he didn’t recognize us, probably because of how scared we both must’ve looked. So I just started calling myself that. Plus it wasn’t the only time someone had looked at me that way. As a matter of fact, this man, the coach, was looking at me the exact same was as Mr. Charles did that night, stunned, and I couldn’t tell if it was because my real name is Castle or because of my nickname.

AUTHOR QUOTE (From Jason’s Author Web site): Here’s what I know: I know there are a lot — A LOT — of young people who hate reading. I know that many of these book haters are boys. I know that many of these book-hating boys, don’t actually hate books, they hate boredom. If you are reading this, and you happen to be one of these boys, first of all, you’re reading this so my master plan is already working (muahahahahahaha) and second of all, know that I feel you. I REALLY do. Because even though I’m a writer, I hate reading boring books too.