BLOG TOUR STOP for Tommy Greenwald’s THE REAL US

Seeing the name TOMMY GREENWALD always brings a smile to my face. Yes, I love his books—reviewed three of them on my blog—but what really causes my grin is what happened in the Fall of 2011. I’d read CHARLIE JOE JACKSON’S GUIDE TO NOT READING and wanted to be sure to pass it along to a special reader.

Lonnie and I met in late August. He had spent his school career causing the early retirement of many teachers and administrators. Lonnie showed up to class about half the time and the office had to make a special filing cabinet to hold his expanding file.  He amazingly seemed to be on grade level in reading and writing. I wanted to make a difference in this kid’s life and steer him in another direction.

“I don’t read books or do homework,” he informed me on day one. “Leave me alone and we’ll get along.”

Yeah, that was not going to work. The second week of school I gave him my copy of Charlie Joe Jackson and said he might enjoy reading it.

This would be the time to insert the heartwarming ending where Lonnie discovered his love of reading and wins the school wide reading contest. He decides to work hard and some day write his own stories… Okay, it didn’t quite happen like that.

I turned and Charlie Joe sailed past my head—high and outside—ricocheting off the wall, and landing on the floor by my desk. The vice-principal happened to be wandering by at the time and carted Lonnie off to the office.

The next morning at a staff meeting we were informed Lonnie would not be returning. He’d broken into the school the previous night and stole three things: A sealed gallon jug filled with baked beans, a package of frozen cinnamon rolls destroying the myth they were fresh baked every morning, and a book—Charlie Joe Jackson’s Guide to Not Reading.

I don’t know what happened to Lonnie, but I do know Tommy Greenwald has a new book out this week and although I haven’t read it yet, here’s what 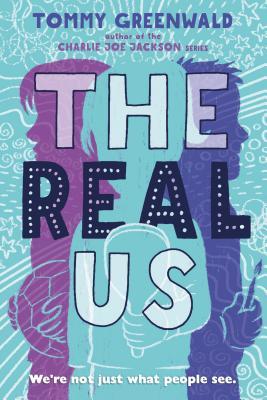 Laura Corbett and Damian White are loners, and not by choice. Kids make fun of smart, sarcastic Laura for her weight and artistic Damian for his tendency to sweat through his shirts. Calista Getz, however―well, everyone agrees that Calista is the prettiest girl in the whole school. Maybe even the whole state. Let’s just say that she sits at the popular lunch table. Laura and Damian don’t.

But when Calista wakes up just before the school dance with the BIGGEST pimple she has EVER seen right in the middle of her face, and her attempts to hide it backfire spectacularly, Laura and Damian are the only ones who don’t ignore her. In fact, they seem to see not only past her pimple, but past her popularity, too. Together, they’ll challenge the school’s status quo in this hilarious, heartfelt novel The Real Us, by Tommy Greenwald.

It’s amazing that I can get paid for doing something that used to get me in so much trouble.

And the fourth time, I’d find myself in Mrs. Sleep’s office. (Our principal.) (It was her real name.) (And it was such a great name that I used it for the principal in the Charlie Joe Jackson books.) (And the drawing looks just like her.) Her office was the stuff of nightmares. My nightmares.

So yeah, what I guess I’m trying to say is if you want to be a comedy playah in middle school, it’s not enough to make kids chuckle once. You have to have a passion for making them laugh, hoot, holler and guffaw over and over again, and you have to be willing to be sent to the scariest place in the entire universe in order to indulge that passion. And it’s that same single-mindedness that comes in handy when writing humor for middle-graders. You can’t be satisfied with one smile per page. You have to be relentless in seeking out humorous situations, and then raise the comic stakes, while keeping one foot in reality. (#itsfunnycozitstrue.)

Humorous situation: George drops his ice cream cone and it lands on his shoe.

Raising the stakes: George’s dog Bonkers slurps up the ice cream cone, chewing up George’s shoe in the process. George’s friend Becky thinks that’s hilarious, until Bonkers notices that Becky has an ice cream cone too, and jumps up and steals her cone, while getting his filthy paws all over her nice white dress that she’s supposed to wear to church in fifteen minutes.

Come on, that’s hilarious, right? Okay, maybe not, but I’m definitely going to have a dog named Bonkers in one of my next books. That’s a great name.

Speaking of names, all funny stories should have characters with funny names. Some of my characters are Irwin Wonk, Baxter Bratford, Mrs. Sleep (we already talked about her) and Sheldon Felden. My favorite all-time fictional name is Fielding Mellish, from Woody Allen’s BANANAS. It’s one of the funniest movies ever, but it would be a little less funny if Fielding’s name had been George Smith.

Sorry, is that off topic?

In case you missed the previous stops or the ones coming up next week, here’s the complete schedule

8 August Maria’s Melange  Why I Wrote The Real Us

Climbing another mountain...writing middle grade novels.
View all posts by Greg Pattridge →
This entry was posted in New Release, Reading and tagged Charlie Joe Jackson, The Real Us, Tommy Greenwald. Bookmark the permalink.