On July 27, 1919 Eugene Williams, an African American teenager, was stoned to death by 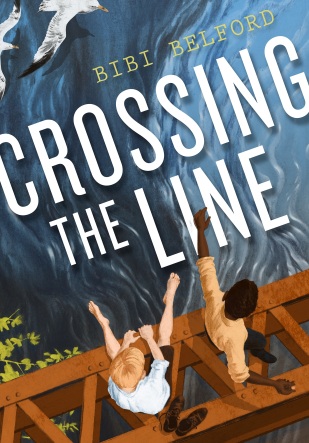 white men when his raft crossed the line to the whites only beach. It set off what is known as the Chicago race riots. This new book by Bibi Belford leads us up to that fateful day with the story of two boys and their friendship.

After reading this engrossing tale it made me sad to think of what little progress we’ve made in 98 years. All you have to do is listen or read the breaking news reports from 2017 on racial tension. There’s no easy way to solve the problem but a start might be to require every fifth grader to read this book. It’s that powerful.

Billy and his new friend Foster can only be friends in hiding for fear of what might happen to themselves or their family. The tidbits on life in 1919 surround the story and put you into that world. Billy narrates in first person perfection. It’s surprising and heartfelt. I’m racing out right now to give my copy to a neighborhood school.

Billy’s family has fallen on hard times, what with his da hospitalized after the Great War and his ma barely scraping by. But it’s no hardship for him when there’s not enough money to pay the tuition for Nativity of Our Lord, the private Catholic school everyone in his neighborhood attends. Billy’s not big on education.

When he transfers to James Ward, a Chicago public school, he finds out there’s a big difference at public school: the kids aren’t all Irish—in fact, they aren’t even all white. It isn’t long before Billy’s found a new best friend in Foster, another fifth grader who also doesn’t have any money, loves baseball, and just happens to be black.

Billy is pretty sure skin color doesn’t matter. Not when he and Foster are just horsing around, playing baseball, working on the docks of the canal, and building a raft at their secret hideout near Bridgeport’s Bubbly Creek. But in the Red Summer of 1919, it does matter.

If I was Foster I would be mad, too.

I feel embarrassed. Guilty. I wish were all born one color. A dark color that don’t sunburn. Being friends with Foster makes me sit up and take notice, like a dog that hears a noise. I’m ashamed I didn’t notice before that. I’m ashamed it’s come to this, when every day in school we stand up and pledge liberty and justice for all.

FROM an INTERVIEW in the Chicago Tribune

While “Crossing the Line” deals with a heavy topic for middle-grade readers, it attempts to do so while keeping certain sensitivities in mind, said Rachel Stark, the book’s editor at Sky Pony, an imprint of Skyhorse.

“We took some considerations with readers’ ages,” she said. “But kids today are grappling with this stuff. They’re as scared and concerned as we are, and it’s our responsibility to give them tools to teach them.”

Exposing young people to these tools is part of a healing educational process, Belford said.

“It’s important for me as a white writer to say I want healing, I want there to be peace in our world and for people to be tolerant of each other,” she said. “My goal is for readers to see that character and say to themselves, ‘That’s like me and I can make a difference in my school, my community, my world. It’s my life, who I open the door for, who I help on the street. I can learn, I can grow, I can be a better person tomorrow.’”

Have a super Thanksgiving!

6 Responses to CROSSING THE LINE for Marvelous Middle Grade Monday