Posted on December 6, 2020 by Greg Pattridge

You or someone in your family have probably experienced the excited anticipation when the next book in in a beloved series is released. The same goes for the main character in NEVER AFTER, Filomena Jefferson-Cho. She joins the mob of other readers waiting to buy the 13th book of her favorite epic page turner. Not so fast—the book’s release was cancelled. The story takes a fantasy turn from there as Filomena discovers the world of Never After and fiction becomes reality.

Nothing ever happens in Filomena Jefferson-Cho’s sleepy little suburban town of North Pasadena. The sun shines every day, the grass is always a perfect green, and while her progressive school swears there’s no such thing as bullying, she still feels bummed out. But one day, when Filomena is walking home on her own, something strange happens.

Filomena is being followed by Jack Stalker, one of the heroes in the Thirteenth Fairy, a series of books she loves about a brave girl and her ragtag group of friends who save their world from an evil enchantress. She must be dreaming, or still reading a book. But Jack is insistent—he’s real, the stories are real, and Filomena must come with him at once!

Soon, Filomena is thrust into the world of evil fairies and beautiful princesses, sorcerers and slayers, where an evil queen drives her ruthless armies to destroy what is left of the Fairy tribes. To save herself and the kingdom of Westphalia, Filomena must find the truth behind the fairytales and set the world back to rights before the cycle of sleep and destruction begins once more.

The enticing story line will please fantasy readers with modern day Pasadena, California becoming a portal to the magical and scary setting Filomena has experienced in the books. Actually, the portal is near the iconic HOLLYWOOD sign—an ideal spot to connect these two worlds.

READ an excerpt from Chapter one here 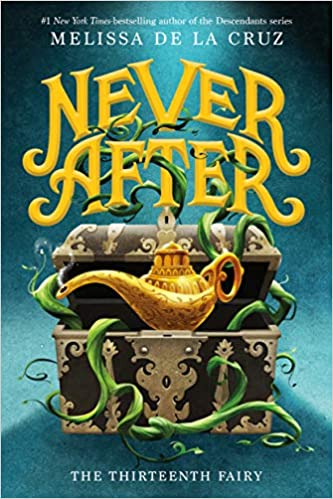 ABOUT THE AUTHOR (From Melissa’s author web site)

MELISSA DE LA CRUZ is the #1 New York Times, #1 Publisher’s Weekly and #1 Indie Bound bestselling author of many critically acclaimed and award-winning novels for readers of all ages, and edited the inspiring anthology of true stories, Because I Was a Girl. She grew up in Manila and moved to San Francisco with her family, where she graduated high school salutatorian from The Convent of the Sacred Heart. At Columbia University, she majored in art history and English. Melissa de la Cruz lives in West Hollywood with her husband and daughter.

I received an ARC for my honest review. I welcome comments below.

10 Responses to NEVER AFTER